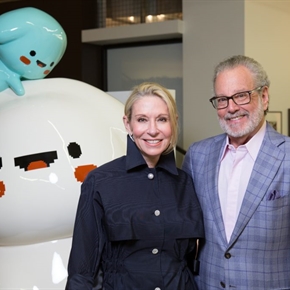 The most beautiful weekend of the year has officially begun: The Dallas Art Fair is in full swing after kicking off with a packed Preview Gala on Thursday night. The 10th edition of the growing art fair has drawn nearly 100 galleries from across the globe to Downtown Dallas’ Fashion Industry Gallery, and posh crowds have been quick to follow.

Ross Avenue became a parking lot on Thursday night as eager art lovers swarmed the venue to get a sneak peek of the weekend’s festivities. The scene inside FIG was just as buzzy.

Fueled by Ruinart Champagne and bites provided by The Joule, Preview Gala guests wandered through a seemingly endless maze of fine art.

As a Dallas Art Fair first-timer, I must admit, I was a little overwhelmed. I spent more than two hours pacing the corridors of FIG, and I saw only a fraction of the fair’s dizzying collection.

Some of the most show-stopping booths came from first-time exhibitors. New York’s James Cohan Gallery made a dramatic debut with fascinating works from Xu Zhen (a canvas covered in puffs of meringue-like pink oil paint will stop you in your tracks), Byron Kim, Simon Evans and others. Bivins Gallery, a local constituent, made its Dallas Art Fair entrée with a symphony of light, color and sound from artist Mary Hull Webster.

The Hole NYC was another show-stealing newcomer (one particular painting by artist Alex Gardner might have been my favorite of the whole lot).

Other must-see exhibitors included Perrotin, with stunning works from Daniel Arsham, Paola Pivi and more; Dallas’ own Talley Dunn Gallery (check out the huge Richard Serra canvas); and Lora Reynolds Gallery’s playful display by the Haas Brothers. The list could go on.

If you’re late to the party like me, there are some things you should know before you go.

For one, the Fashion Industry Gallery (FIG) is a deceivingly large building. There’s a good reason that the fair spans three days. You’re going to want to make more than one trip.

Secondly, the Dallas Art Fair is a feast for the eyes, offering not only a plethora of fine art, but prime people watching.

Finally, if you begin to experience sensory overload, feel free to make a pit stop at one of the fair’s designated chill spots – pop-up shops from TenOverSix and Weekend Coffee.