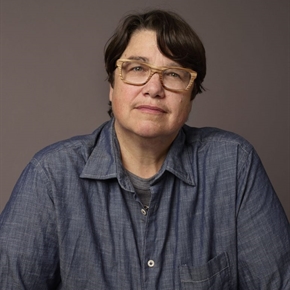 We count on Texas-founded Glasstire, one of America’s leading online sources for art world insiders — and those who want to be insiders — for hot type and incisive dialogue. Beginning in 2015, Glasstire morphed its annual fundraiser from an art auction format into something more lasting and impactful.

Now it centers around dialogues with leading contemporary masters, which are faithfully recorded to live on in posterity on YouTube.

To date, we’ve had artist headliners William Wegman (2016, which proved Wegman is far more than his canine imagery) and Robert Irwin (2015, the latter in conversation with powerhouse Los Angeles Museum of Art director Michael Govan) as Glasstire guest speakers.

Now the lively, authoritative website reaches out to a pair of women, leaders of the avant-garde, when its annual “Off Road: Conversations with Artists Offline” unfurls Saturday, April 29, 5 pm, on the Alley Theatre’s Neuhaus Stage. (Those in the know never miss these stimulating talks, which later become part of art history.)

This spring is no exception, when Glasstire again returns to a pairing format — and engages two smart voices. Be there when American photographer Catherine Opie talks about her work — potent, honest, evocative images that hover between documentation and the conceptual, with subjects spanning everything from the landscapes and townspeople of her Sandusky, Ohio, hometown to the counter culture of being a gay woman and the interior of Elizabeth Taylor’s mansion. (Opie’s imagery was recently featured in the sold-out booth of Lehmann Maupin at the Dallas Art Fair.)

And Opie’s converses with a feminist voice of letters. Hear author and poet Eileen Myles — whose unflinching 1994 autobiography Chelsea Girls cast her in the literary limelight — in conversation with the MoMA, Tate, and Guggenheim-collected Opie, at a time when the nature and meaning of the American experience and an artist’s role in it are being questioned.