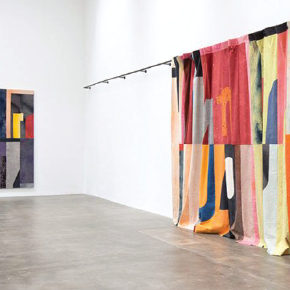 The Dallas Art Fair kicks off tonight and continues through the weekend at Fashion Industry Gallery. Hundreds of galleries from around the world will exhibit, but it’s just the protuberant tip of an iceberg of art happenings that should have you, art star that you are, trotting from show to show.

Olivia Newton-John is a “Physical” and spiritual presence, as are we all, depending on where you fall on the whole mind-body duality thing. But only one of us—the broadest possible us, that is, even though we are really all one—starred in Grease with John Travolta and plays Verizon Theatre on Thursday night.

The Dallas International Film Festival keeps rolling into its final weekend. Go here for some of our thoughts on what’s already transpired, and on what’s to come, including a repertory screening of Pineapple Express with director David Gordon Green in attendance at the Texas Theatre.

Drive-By Truckers, a great and distinctly Southern band unloved by the kind of Southern men Neil Young warned you about, brings its hillbilly elegies and laments of Trump’s America to the Granada Theater.

Vince Staples, who should be one of your favorite rappers if he isn’t already on the shortlist, plays South Side Music Hall. The great sage of Dallas music, Jeff Liles, again assumes his mantle of Cottonmouth, Texas, for an evening recounting the “history of popular music in Dallas.” There are few greater authorities on that subject than Liles, performing at the Kessler, where he is artistic director. The Nasher’s Soundings series has Jorg Widmann, composer-clarinetist of your dreams, on deck.

Bands on stages and artists in vendor booths swarm Deep Ellum for the Deep Ellum Arts Festival, which runs all weekend.

The Scarborough Renaissance Festival, Comic Con for people into medieval dress-up before HBO started airing Game of Thrones, returns to Waxahachie. The faire is a Middle Ages throwback without the plagues, only minor feudalism, and almost no decapitations. It runs weekends through May 29.

The Old 97’s and their Ferris wheel are back for the Old 97’s County Fair at Main Street Garden, joined this time around by Mavis Staples and Lucinda Williams.

Ariana Grande plays American Airlines Center. Artist Katherine Bernhardt, whose “pattern paintings” feature everything from Doritos to cigarettes as repeating motifs, is the focus of the newest FOCUS exhibition at the Modern Art Museum of Fort Worth.