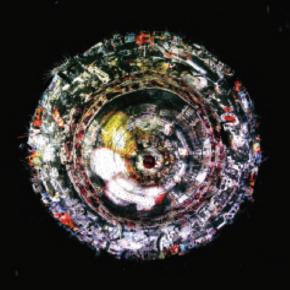 For four days this April, Dallas will become the center of the contemporary art world with the return of Dallas Art Fair. Now in its ninth year, the fair has become a favorite on the circuit due to a unique blend of the city’s top-tier collecting community, world-class institutions, and down-to-earth charm. This year sees the return of many booth veterans, as well as the addition of several newcomers, lured to the fair by Dallas’s growing role as a contemporary art powerhouse.

Among the first-timers is the San Juan-based Roberto Paradise, which opened in 2011. Owner Francisco Rovira Rullán boasts an impressive list of museum credentials, which belies the glitzy, most-interesting-man-in-the-world-sounding name of his very serious endeavor. Functioning as a tongue-in-cheek alter ego for Rullán, Roberto Paradise is an amalgamation of enigmatic art world tropes—globe-trotting collector, young upstart artist, trust-fund playboy—that winks at Rullán’s tactical approach of dropping the hyper-connected, yet unknown, Paradise on the art world like a bomb. Since its inception, the gallery has aggressively participated in a slew of international art fairs, biennials, and museum exhibitions, while cultivating relationships with galleries like Andrea Rosen and Josh Lilley. Rullán is often referred to as a trailblazer, one of a younger generation of gallerists with art historical chops, who value artistic collaboration and cultural propagation above the bottom line.

For his inaugural foray at the Dallas Art Fair, Rullán will be showing work by two artists with Dallas connections. Back in 2014, Spanish-born, Puerto Rican-raised José Lerma participated in the Dallas Biennial, as part of a two-person show at Oliver Francis Gallery. Lerma’s visually enticing paintings, drawings, and sculptural installations layer narratives to the point of abstraction. His collage-type works entangle the past and the present, collapsing the space between the personal and historical.

Also in Paradise’s booth is Southern Methodist University alum Caroline Wells Chandler, who received his Bachelor’s in Fine Art from the school in 2007. After learning to crochet at SMU, Chandler retreated to Tyler, Texas, where he embarked on blending the craft into his art practice as a way to remain socially engaged with his family, yet artistically productive. His colorful textiles explore queerness and sexuality, pop culture, and the art historical canon, with joyous characters ranging from more traditionally male-looking athletes, to radically queer “bois” with mastectomy scars and rainbow genitalia, to non-human scatological lumps. In addition to the fair, Chandler has a solo show at Dallas’s Conduit Gallery opening on September 9th.

From across the pond come this year’s fair newbies Waldburger Wouters, Kate MacGarry, and Grimm Gallery. Originally established in 2009 as Gallerie Waldburger, Waldburger Wouters shifted to its current iteration in 2014 with the addition of partner Tim Wouters. The Brussels-based gallery focuses on solo exhibitions, cultivating their small, eclectic roster of ten artists as individual practices that exist in harmony with one another. Patrick Waldburger says, “Waldburger Wouters has a focus on international young art. The gallery is interested in artists that cross borders and develop hugely unique artistic languages.”

The gallery’s booth will feature the work of Jakub Nepraš, a young video artist from Prague. This is the frst time Nepraš will show work in the United States, and Waldburger Wouters is eager to share it with a new audience. Hovering between science fction and the natural world, the artist projects videos onto three-dimensional sculptures, creating objects that appear to have various living beings emanating from within. The work springs from a childhood obsession with treehouses, marrying organic, natural forms with contemporary humanity and technology. The pieces range from small sculptural forms, to large-scale, sitespecifc installations, such as his 2012 work, Landscape, which will be at the fair.

Nepraš’s videos are collages of both natural and mechanical systems, looping together to form something akin to the internal operations of a biological organism—suggestive of the circulatory system or processes such as reproduction and mitosis. The resulting effect is the hybridization of biology and technology: the creation of a new post-structural, rhizomatic being that absorbs its surrounding elements in a process of continual evolution.

Principles Jorg Grimm and Hannah Reefhuis started Grimm Gallery in 2005. The duo now has two spaces in Amsterdam, with a focus on emerging contemporary art. Boasting a rigorous international program, Grimm Gallery represents a number of American artists, including Matthew Day Jackson, Nick van Woert, Letha Wilson, Dave McDermott, Eric White, and Jonathan Marshall, many of whom will be shown at the fair.

Marshall, who received his BFA from the University of Texas at Austin in 2003, will feature prominently in the gallery’s booth, with a piece titled The Incomplete History of Walking (for Jack), 2014. Consisting of a large-scale, handmade world map, and a library chair/ladder (based on a design by Benjamin Franklin), the work is suggestive of the eccentrically laborious efforts of a history buff or genealogical enthusiast. Stemming from a genre of modern literature and flm called “mythopoeia,” in which the writer or flmmaker creates a fctional or artifcial mythology comprised of Grimm Gallery many social, historical, political, and theological aspects, Marshall wants viewers to create their own narratives for his work from a combination of real and fctional possibilities. The act of artmaking is an exercise for the artist to explore his own role in space, time, and culture.

The gallery will also show the work of Brooklyn-based artist Nick van Woert. Like Marshall, Woert is fascinated with the cultural materiality of the past-present-and-future, blending craft and process with readymades and found objects. It’s a Trap (I told you twice), 2016, comes from his recent solo exhibition of the same name, at Phoebe Projects in Baltimore. The piece frames Woert’s concerns about the insidious nature of “things,” and the manner in which we are arbiters of our continual near destruction, creating readily available materials that are merely situational horrors-inwaiting. It’s a Trap can be read as a hindsight-is-20/20 description of the past, or as an ominous message from the future.

From London comes Kate MacGarry. The gallery opened in 2002 in the East End and represents seventeen international artists, many of whom had their frst commercial exhibitions in the space. Kate MacGarry has a special emphasis on flm and video, representing seven artists working in this medium, including African artist, Samson Kambalu, whose works she will be bringing to the fair.

Known for his Situationist-inspired mixed-media installations that reference the Chewa Nyau culture of his native Malawi, the London-based Kambalu will be showing a suite of photographic collages that pair images of President Barack Obama and Kenyan nationalist Thomas Mboya, who was assassinated in 1969. Like articles unearthed from a time capsule, the collages evoke a sense of nostalgic hope for a promise never quite fulflled. The pairing of these two political fgures—one who is championed as a hero of Kenyan independence, the other targeted for his Kenyan heritage, and both of whom fought to unshackle their countries from their haunted pasts—is heartbreaking considering the parallel of Mboya’s assassination and the death of Obama’s “Yes We Can” legacy. Pictures of a young Obama and a young Mboya hint at the possibility of what might have been, giddy optimism brushed aside with a wistful sigh.

MacGarry will also show the work of Francis Upritchard, who represented New Zealand at the 53rd Venice Biennale in 2009. Upritchard will show some of her more recent sculptural works: spidery humanoids dressed in outfts that combine elements of contemporary streetwear, historical and folk costuming, and swaths of decorative textiles. The resulting fgures are mash-ups of cultural appropriation, resembling otherworldly creatures that gathered their ideas about how to pass for “human” by walking through a museum. Existing somewhere between tourist, talisman, sage, and comic relief, these creatures seem to embody “us” in a clumsily naïve manner.

Another European gallery, Galerie Bernard Ceysson, chose the Dallas Art Fair as a strategic accompaniment to participation in Armory, Frieze, and Art Los Angeles Contemporary. With plans to add a New York post to their locations in Luxemborg, Paris, Saint-Etienne, and Geneva, partner Loic Garrier says, “We want to be more present on the artistic scene in the United States, and Dallas is a good opportunity for us to learn more about the American art market.”

As a bridge between the French and American art markets, the gallery plans to exhibit a two-person show between Frenchbased Claude Viallat, and Los Angeles-based Jesse Willenbring. One of the founders of the Supports/Surfaces movement in the 1970s, Viallat has been radically challenging formal notions of painting for the last four decades, employing devices such as borders, trims, and faux frames, as well as innovative supports like tents, tablecloths, bed sheets, and rugs. In 1966 he introduced his signature ovoid shape—likened to a bean, bone, and artist’s palette—which he applies all over the surfaces of his works.

Like Viallat, Willenbring explores Modernism’s painterly lineage. His simple use of tools such as pencil, charcoal, and paper, and balmy brushwork, pastel tone, and sophisticated color sensibility recall the work of early abstract artists such as Sonia Delauney. Despite being 44 years apart in age, both Viallat and Willenbring share a relationship with Henri Matisse, bringing together color and shape in an organic, experimental fashion, reexamining the role of Modernist painting in contemporary art.

Returning to the fair after a three-year hiatus is San Franciscobased Anthony Meier Fine Arts. Established in 1984 as a private dealer in the secondary market, Anthony Meier built a highly regarded international reputation specializing in post-World War II contemporary masters. Emerging and mid-career artists were added to the roster in 1996 with the opening of a public space, which holds fve shows per year.

The gallery will show a mix of resale and gallery artists at the fair, with secondary market pieces by industry legends Gerhard Richter, Josef Albers, Ellsworth Kelly, and Donald Judd. Gallery artists include Teresita Fernández, Jim Hodges, Donald Moffett, and Dave Muller. Known for her large-scale public installations, Fernández’s latest work featured images of fre, referencing Ed Ruscha’s famous 1964 book, Various Small Fires. The subject of a 2013 exhibition at the Dallas Museum of Art, Hodges’s delicate, temporal pieces have a loyal following amongst the city’s institutions and collectors. Donald Moffett’s lushly humorous shag paintings, which appear to be turf or grass, are made of oil paint methodically extruded onto the surface. The rock-and-roll-infuenced work of Dave Muller often features elements such as vinyl records and disco balls. In a current exhibition at the Minneapolis Institute of Art, Muller created an eclectic installation of contemporary works from the museum’s permanent collection against his hand-painted murals, while music from his extensive collection streams through a listening station in the galleries.

These artists are just a small taste of what will be offered by roughly ninety galleries participating at the Dallas Art Fair, and anticipation for a positive response from visitors is high. “We know the Dallas/Ft. Worth area to be a culturally rich audience who is both acquisitive and engaged. It will be an exciting week connecting with this group of collectors and enthusiasts,” says Anthony Meier Fine Arts Director, Lauren Ryan. It’s a sentiment echoed by Roberto Paradise owner, Francisco Rovira Rullán, who proclaims, “We are ready for a great time!”