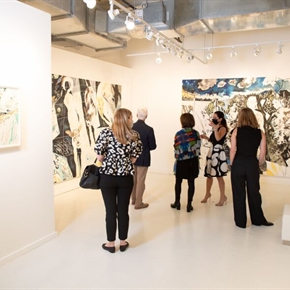 Here's a list of what to check out at the Fair and around the city.

The Dallas Art Fair kicks off Thursday for its 4-day run at the Fashion Institute Gallery (F.I.G.) in the Dallas Arts District. National and international galleries will display a range of artworks, including paintings, sculpture, video and installations by modern and contemporary artists.

Every year, the Dallas Museum of Art also selects works to add to its permanent collection as part of the Dallas Art Fair Foundation Acquisition Program. Ten artworks from this year's fair have been selected.

""Three are from right here in Dallas and others coming from around the globe, including Poland and Kenya," said Dr. Anna Katherine Brodbeck, the DMA's curator of contemporary art. "Some are at the very beginning of their careers. The youngest artist is just 23. Some have been making work for decades and are newly finding well-deserved acclaim for their robust body of work."

Brodbeck and Cornell said the acquisition program allows the fair and the DMA to be responsive to the most exciting ideas coming out of the contemporary art world right now.

Some of the past artists selected during the fair have gone on to great acclaim. The DMA acquired a piece from the late painter Matthew Wong at the fair in 2017. Now, the museum will host Wong's first retrospective this fall.

"He had never been in a museum collection before and now he's widely collected," Brodbeck said.

Here's a look at the other events around town this week at or related to the fair.