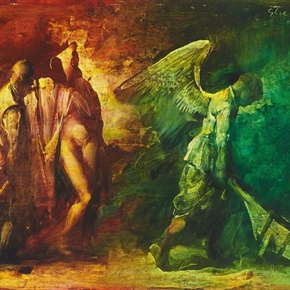 With an increasing number of people relocating to Texas from places like New York and California, Dallas Art Fair director Kelly Cornell recently remarked in Artnet, Dallas' art scene is on the cusp of a major expansion.

The arrival of galleries from far and wide at this year's Dallas Art Fair reflects this, including Perrotin, Anat Ebgi, and Kerlin Gallery, among many more. Below is a selection of eye-catching pieces from across the fair.

Layered and introspective, Adrian Ghenie's paintings have continued to transfix since the early 2000s. After graduating from the University of Art and Design in Cluj-Napoca, Romania, Ghenie co-established Galeria Plan B in the city in 2005 while developing his own practice, becoming one of the most significant painters of his generation.

Gallerist Juerg Judin spoke with Ocula Advisory about his long-term collaboration with the artist last year, emphasising, 'He has not once rested on his laurels and has resisted trusting a "formula", like many artists do once they have reached this level of success.'

Among an array of striking abstract sculptures and paintings, Louis Stern Fine Arts features this kaleidoscopic work by James Little.

Little, who creates his own colours by combining heated beeswax with pure pigments, is included in the current Whitney Biennial with similarly layered paintings.

We included the artist in a round-up of installations that stole the show, with the presentation of the artist's hard-edge geometric, black and grey series in a dark room offering an immersive experience.

Born in Punjab in 1932, yogi, painter, and poet Sohan Qadri travelled extensively across East Africa, North America, and Europe before settling in Copenhagen, where he opened up a yoga and meditation centre.

The artist infused spirituality into his minimalistic paper works, which involved thick intaglio paper being soaked in dies and inks. Scoring their surfaces and applying pigments varying in shades of ochre, saffron, cerulean, and crimson, the paintings have a sculptural feel as a result of the scored recesses in the swollen paper.

In 2020, Sundaram Tagore Gallery brought paintings by Qadri together with those by Neha Vedpathak—who also explored the three-dimensional possibilities of paper—for the exhibition Surface Rhythm.

Ouattara Watts' canvases are made up of symbols, forms, and colours that interconnect to create cosmic cartographies.

Born in Abidjan in 1957, the artist moved to Paris to study at the Écôle des Beaux Arts in 1988, where he became involved in a community of West African Francophone artists. During this period, the artist met Jean-Michel Basquiat, who encouraged Watts to relocate to New York.

Watts' work was catapulted to the world stage in the 1990s, included in presentations such as the Whitney Biennial, Documenta, and the Venice Biennale.

On 23 April 2022, a solo exhibition of the artist's paintings will open at Karma in New York.

Graduating with an MFA from Goldsmiths College in 2008, Vicky Wright is a British painter concerned with capitalism, ecology, and the interconnectedness of all beings.

Wright's visual poetry shifts between the figurative and abstraction, creating worlds that are fluid and surrealistic. In 2018, Josh Lilley brought a solo presentation of her work to Art Basel Hong Kong, which was followed by a solo exhibition at their London space in 2020.

Wright's ethereal abstraction merges with her figures. Here, an alluring 'Sungod' exudes an aura that is of both warmth and impending apocalypse.

Mary Hermansader's paintings and drawings expand upon natural subjects, exploring human relationships with the earth and one other.

From her studio in Vermont, Hermansader creates surrealistic scenes drawn from her dreams, travels, and current affairs. Past works have responded directly to world events, such as 'Back Through Black'—a series begun in 2007 that used black paper to reflect on the wars in Iraq and Afghanistan.

Across Verne Dawson's compositions, nature and human activity are interwoven.

Ice-age creatures, including a woolly rhinoceros in Boy with Woolly Rhinoceros (1999), come together with modern elements such as the trailer in this painting, to form a fantastical world fusing past and present.

The artist's work has been included in major exhibitions such as the Yokohama Triennial, Whitney Biennial, and Lyon Biennial.

Drawing from literature, theatre, and architecture, her exhibitions come together as 'cohesive yet untethered tableaux' in which the viewer is integral, as Stephanie Bailey recently reported in Ocula Magazine on the occasion of the artist's solo exhibition at Green Art Gallery in Dubai earlier this year.

Since graduating from her MA in Visual Poetics at UNICAMP in Brazil in 2010, the artist has presented her work in solo exhibitions at galleries and institutions including Galeria Jacqueline Martins, Carlos/Ishikawa, Sesc Pompeia, and Almine Rech.

They are also reflections of Hovsepian's experience immigrating to the U.S. from Iran, with the artist explaining, 'I live with a hyperawareness of my body, which I attribute to growing up thinking of it as a politically charged location.'

Hovsepian's works reside in major public collections including the Solomon R. Guggenheim Museum, Studio Museum Harlem, and Art Institute of Chicago, from where she graduated with an MFA in 2002.