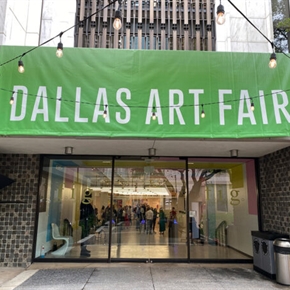 In its first year, the fund had $50,000 for acquisitions; now in its sixth year, it has $125,000 to support the DMA’s broadening of its permanent collection. The artworks were selected by DMA curators Dr. Anna Katherine Brodbeck, Dr. Vivian Li, and Dr. Nicole R. Myers, and a group of fund donors.

In a press release, Kelly Cornell, the Dallas Art Fair Director, said, “This year we really feel that the quality of work at the fair has gone above and beyond—so much so that it was hard for the group to make a final decision. I am thrilled for the selected galleries and their artists, and of course what this means for their relationship with the DMA. Our fund continues to strengthen our ties with the museum, and meaningfully connect our galleries with its curators.”

Dr. Brodbeck, the DMA’s Hoffman Family Senior Curator of Contemporary Art, stated that the museum chose these works in particular because the artists were each speaking to relevant issues that reflect this specific moment in time. Of the ten works acquired, two were from Various Small Fires, which opens its Dallas gallery tonight.

Dallas-based Xxavier Edward Carter (represented by Erin Cluley Gallery) was one of the Texas artists whose work was acquired by the museum. This large mixed-media work uses receipts and museum and art fair materials as its surface.

An acrylic painting on paper by Keer Tanchak, a Canadian artist currently based in Dallas and represented by 12.26, was also among the works added to the museum’s collection.

Evita Tezeno, a Dallas-based mixed-media artist who is represented by Luis De Jesus Los Angeles, is the third Texas artist to have work acquired by the DMA from the Dallas Art Fair.