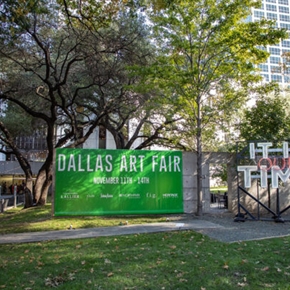 The Dallas Art Fair has announced the exhibiting spaces for its upcoming April edition. This year’s roster includes 85 galleries, which is a significant increase from the 58 galleries in last year’s reduced-capacity fair, but down from previous fairs (the 2019 event featured 95 exhibitors).

The 2020 fair was canceled due to the COVID-19 pandemic and the 2021 fair, which would typically be held in the spring, was postponed until November. This coming 14th edition of the Dallas Art Fair will take place from April 21-24 at the Fashion Industry Gallery (FIG) building.

In a press release, Dallas Art Fair Director Kelly Cornell remarked, “The Dallas art market has been on a sharp incline in recent years, and since the pandemic we have seen Texas’s population skyrocket, with more and more people relocating here from places like New York and California. We have seen this positively impact the arts and collecting in Dallas. With that in mind, we are ready to be back in full swing this April and stage the full-size, high quality fair collectors and galleries expect from us.”

Some key exhibitors returning for the 2022 fair include a selection of New York galleries: Derek Eller Gallery, KARMA , Kasmin, and Perrotin (which has additional locations in Paris, Hong Kong, Seoul, Tokyo and Shanghai). Another returning exhibitor is Various Small Fires, which, as reported earlier this month, is slated to open a Dallas location in April. First-time exhibitors at the Dallas Art Fair include Galería CURRO (Mexico) and Over the Influence (Hong Kong, Los Angeles, and Bangkok).

As part of the Dallas Art Fair Foundation Acquisition Program, prior to the opening of the fair, curators from the Dallas Museum of Art (DMA) and private donors will have the opportunity to tour the exhibitors’ booths and select works of art which will be purchased for the museum. Over the six years that this program has been in operation, it has acquired nearly forty artworks for the DMA.

This year also marks the return of The Eye Ball, the fair’s annual closing party. Presented by Headington Companies, this outdoor event will be held on the lawn at The Joule Hotel, in front of Tony Tasset’s 30-foot-tall sculpture, Eye. The event will take place on Saturday, April 23 from 7:30-10 pm and will benefit the Foundation’s museum and student education initiative.

April is also Dallas Arts Month, an annual city-wide celebration of arts and culture. Museums, theaters, and other arts venues will host an array of exhibitions and events to mark the occasion. The DMA will present Spirit Lodge: Mississippian Art from Spiro, which will be the first major exhibition dedicated to the art and culture of Mississipian peoples and will showcase nearly 200 ancient and contemporary works. The Nasher Sculpture Center will present Harry Bertoia: Sculpting Mid-Century Modern Life, Sightings: Olivia Block, and a satellite exhibition of Alejandro G. Iñárritu’s Carne y Arena. The Dallas Contemporary will present exhibitions by Borna Sammak, Lonnie Holley, College Station-based painter Natalie Wadlington, and Houston-based sculptor Joseph Havel.

Below is a full list of exhibitors, provided by the Dallas Art Fair.