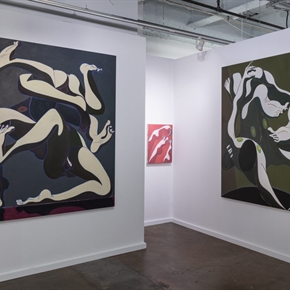 The Rescheduled Dallas Art Fair Opens With Slow But Steady Sales and an Eye Towards Local Institutions - November 12, 2021

It’s often said with a smirk that Texas is its own country, and that its inhabitants tend to do things their own way. This is no less true for the art scene down in Texas, as I learned at the VIP opening for the Dallas Art Fair on Thursday, November 11. The crowd trickled in at a leisurely pace, and Houston dealer Bill Arning noted to me that often, the local collectors come to the VIP opening, take it all in, let it simmer for a few days, then return on Sunday with their offers—things just happen a little slower down south.

“‘Two by Two’ was a few weeks ago, so this is a weird week,” remarked Mills Morán, the owner of Los Angeles-based gallery Morán Morán. He was referring to the 2021 fair’s schedule change, prompted by the global health crisis, from its usual April time slot to two weeks after one of Dallas’s major art events: the annual charity gala. “I’m not sure how many people we’ll get. Probably mostly locals, but there’s some great locals.”

His gallery was among 59 exhibitors who made the trip for the deep-pocketed crowd, and early sales did come in. Morán saw to the sale of two paintings by Willie Stewart for $18,000 a pop, and Five Virtues (2021), a sugar-lift aquatint with chine-collé on paper figuration by Tunji Adeniyi-Jones for under $15,000.

At Simon Lee’s booth, several works from their solo booth of paintings and works on paper by Chris Huen Sin Kan sold to both private collections and institutions within a range of $20,000 to $55,000. The booth had nearly sold out prior to the opening, but the gallery was holding a few pieces back so that they could save some for the local collectors. Lee remarked of the work in the booth, “Despite its large scale, Chris’s work exudes great intimacy through its autobiographical content and the combination of Chinese calligraphic techniques with Western painting traditions. His radical use of changing perspective is also a distinct feature of his work.”

Two booths definitely did sell out, however. New York’s Jack Barrett, making his Dallas Art Fair debut, sold out his selection of work by Amy Brener, Haley Josephs, Paul Rouphail, Dylan Vandenhoeck, Blair Whiteford before it even opened, all within a range of $5,000 to $50,0000.

Half Gallery also sold out its booth, albeit a little bit more slowly. The booth mounted figurative drawings and paintings of various sizes by Mark Yang, a recent graduate of Columbia’s MFA program. Yang’s paintings depict unsettling images of male intimacy, inspired by his perception of the cultural difference between male friendships in Korea, where his family is from, and the U.S., where he grew up. Half Gallery is set to host a solo show of Yang’s work next year, and when asked about how he feels about his success in Dallas, he said simply, “I mean I just graduated from grad school, so everything seems really surreal.” Half Gallery’s founder, Bill Powers, was not only exhibiting at the fair but also patronizing it: he and Yang both bought drawings by Carroll Dunham for $8,500 each from James Barron Art of Kent, Conn.

Tiny placards were scattered all around the fair, denoting which pieces had been scooped up the the DMA. One dealer, Jayne Drost Johnson of JDJ Gallery in Tribeca and Garrison, N.Y., was particularly thrilled to see a work by Susan Weil titled Color Configurations 2 (Red) (1998) receive the museum’s imprimatur. The DMA bought her piece, a mixed-media wall work depicting fragments of the female body, for $36,000. Weil, who is currently 91 years old and studied under Josef Albers at Black Mountain College, had yet to really gain much institutional recognition until this acquisition. “She’s someone whose just totally overlooked by the American art world for decades,” Johnson explained. “With the Rauschenberg retrospective [at the Museum of Modern Art in 2017] that happened, people started to understand how big of a role she played in some of his major projects, like the cyanotypes. She taught him how to make those, they were collaborative. But she wasn’t credited.” Johnson added, “I called her and told her the news, and she was absolutely thrilled.”