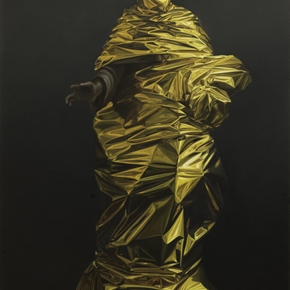 by Christopher Mosley and Lyndsay Knecht

“I think the Dallas art scene is really important,” Saenger said. “Collectors here have been collecting for generations, and that doesn’t happen often in many cities or states in the U.S. I mean, it happens in New York, it happens in L.A., but Dallas has also become this art hub.”

This is an enormous moment of entry for the pair, as well as the mostly Mexico City–based artists whose work they’ve brought to the fair. It’s also a significant reentry for every exhibitor and patron who comes through the door of the Fashion Industry Gallery. While smaller in numbers than previous editions (this year, there are 59 galleries participating, versus almost 100 in 2019), as exhibitors open their booths to patrons for the first time since the last in-person Dallas Art Fair in 2019, the fair offers a chance for the world to finally get a clearer view of the talent the city has to offer along with its established collectors’ market.
“We also have a larger group of local galleries from here in Dallas, fortunately, with some opening and some coming back to life since the last fair,” said Dallas Art Fair director Kelly Cornell.

Last year’s edition of the Dallas Art Fair, originally scheduled for April 2020, was only the second large-scale international fair to go virtual (both on the fair’s own site and on Artsy) due to the COVID-19 pandemic. However, galleries still pulled in $3 million in sales over a 10-day period, according to fair officials. Collectors with a few more weeks to adjust to online platforms turned out in earnest for Frieze New York in May 2020, with Hauser & Wirth pulling in more than $5 million on the first day alone. Because of the power that the traditional fair experience can have for collectors, an in-person Dallas Art Fair was slated for October 2020 with almost 100 exhibitors, but the relief from COVID-19 that the world hoped would come last fall did not, and the fair was canceled altogether. Dallas Art Fair officials did not issue refunds to gallerists who’d already reserved their spots, and instead offered to cover half the cost of a booth for the next two years of the fair.
This year’s edition—its thirteenth—takes place both in person (from November 12th through 14th) and on Artsy (through November 30th). And, despite the pandemic, 2021 somehow brought new beginnings for Dallas and its art ecosystem: Local mainstay Erin Cluley Gallery opened its sister venue, Erin Cluley Projects, in April and folded its roster of emerging talent—including Xxavier Edward Carter—into a booth for the Dallas Art Fair; and Kevin Ruben Jacobs revived Oliver Francis Gallery with a sense of humor as Oliver Francois Gallerie, or OFG.XXX.

Cris Worley has hosted a booth for her eponymous gallery at every Dallas Art Fair except the first one in 2009. She welcomed an opportunity for more depth of engagement with collectors. “It’s a little bit more mellow, but I don’t see that as a negative right now,” Worley said. “It’s calm, and we’re able to have good conversations with people because of that.”

Upon stepping into the Fashion Industry Gallery, visitors will immediately see a sculpture by North Texas–based artist Alicia Eggert that features a sign flashing the words “It Is Time.” For the artist, the phrase is a portal to all kinds of reckoning: It calls to a stand taken by Dallas Art Fair officials to support Planned Parenthood with $50,000 when the Texas anti-abortion law came down, and it represents the promise of a large-scale version of this sign she plans to install for civic pride in partnership with the minister of education in Freetown, Sierra Leone.

Fairs and patrons are still in touch-and-go mode at the end of this year. The Delta variant pushed the Dallas Art Fair out of its usual spot in April, when the city sponsors a month of arts programming in the fair’s orbit. Now that the fair is back, Cornell is hoping that collectors will be, too. “Success means great attendance, and success means sales, and sales mean that galleries will ultimately return to the fair,” she said.

Some exhibitors had a knockout first day. Luce Gallery from Turin, Italy, sold or reserved everything featured on-site in its booth, with one Auudi Dorsey painting remaining. In a preview document presentation sent to collectors, four of five works by Grace Lynne Haynes found a home at a price range of $8,500 to $16,000. Haynes’s exuberant paintings of Black women reached art lovers during the lockdowns brought on by COVID-19 in summer 2020 via New Yorker covers, and her paintings on view in Luce’s booth were exuberant with motion. Limitation 1 offers an especially thrilling exchange with the viewer. “The two questions being asked by the woman in the painting are: ‘Do you see me, and do you see me correctly?’” Haynes explained.

Santa Fe, New Mexico’s Turner Carroll Gallery sold works by Kara Walker and Hung Liu. The gallery is also courting interest in Brooklyn-based artist Caledonia Dance Curry, who goes by the name Swoon
and who inaugurated the Dallas Art Fair’s long-developing partnership with nearby Klyde Warren Park. Curry’s large-scale, dioramic work The House Our Families Built appears in the public space as part of the fair.

OFG.XXX’s booth served as a homecoming of sorts for artists who got their start in Dallas. Kevin Ruben Jacobs was among the first curators to take note of the now more well-known Morehshin Allahyari when he first launched his gallery a decade ago and Allahyari was a rising star working in Dallas. Nine digital drawings mounted on Dibond (a form of aluminum sheet) from her “Talisman” series hang alongside a vivid painting by Dallas-based artist Francisco Moreno, whose work opened the first exhibition Jacobs curated. Rich abstractions by River Shell—whose curatorial project PRP is a gem of the Dallas underground—and an unannounced painting by minimalist artist and Southern Methodist University alum Jeff Zilm round out a must-see program that represents the most clever curation Dallas has to offer. Jacobs hosted a solo exhibition of Zilm’s work before it appeared at London’s Simon Lee Gallery.

Simon Lee Gallery is also at the fair this year, with a solo booth of works by Chris Huen Sin Kan. On Thursday, the gallery placed one work with a U.S. institution, and several others with private collections. Prices for these new paintings and works on paper range from $20,000 to $55,000.

During the fair’s run, Cris Worley will also be showing early drawings by Richard Patterson at her gallery space. Patterson has “lived and worked in Dallas for many, many years,” Worley explained, “but not exhibited here.” Seeing art and having it displayed in person is an irreplaceable experience, Worley went on to say. “This business is so much about people,” she said. “It’s about the spirit of people, whether it’s the physical manifestation of the artist’s work, or just the connectedness, dealing with clients and collectors, curators. We’re all here for something joyful. And it’s a shared love.”

As fairs cautiously reopen, patrons will surely welcome these opportunities for more intimate community building. How galleries choose to seize on these chances is up to them. In the case of the Dallas Art Fair, creative presentations abound, highlighting an increasingly impressive art scene that is always deserving of a closer look.