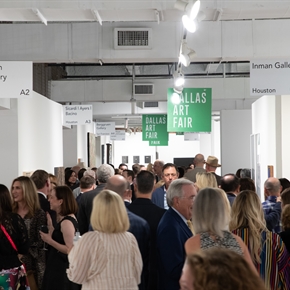 SMSThe Dallas Art Fair announced the full lineup for 2020 this morning, including a list of 94 international exhibitors and the addition of a special exhibition focused on the current practices of North Texas artists. The fair returns to Fashion Industry Gallery for its twelfth year from April 16-19, the heart of Dallas Arts Month.

There are 22 new exhibitors in the mix this year, including Massimo De Carlo (Milan, London, and Hong Kong), which represents artists like Maurizio Cattelan, Elmgreen & Dragset, and George Condo; Salon 94 (New York), which represents Marina Adams, Judy Chicago, and Marilyn Minter, among others; and the conceptually ambitious Carlos/Ishikawa gallery from London, which specializes in socially and politically charged artwork.

While Dallas-area galleries only make up a small portion of the list, the aforementioned new exhibit will give local artists a prominent platform at the Dallas Art Fair. Justine Ludwig (Executive Director of New York’s Creative Time and former Deputy Director/Chief Curator of Dallas Contemporary) and Brandon Kennedy (Dallas Art Fair Director of Exhibitor Relations) co-curated the show, titled, Here Now: North Texas Artists in 2020. The show aims to provide an overview of the Dallas arts scene by exploring the ongoing practice of more than two dozen artists. The participating artists have yet to be announced.

The Dallas Art Fair will, of course, bring accompanying events to round out Dallas Arts Month. The fair culminates with the ultra-trendy Eye Ball party at The Joule on April 18. Access to the party is available with the fair’s $600 Patron Pass Plus, which also includes admission to the Dallas Art Fair Preview Benefit on Thursday, April 16. General admission is a tad more accessible at $27.50.

The Dallas Museum of Art, Nasher Sculpture Center, and Dallas Contemporary have exciting exhibitions slated to coincide with Dallas Arts Month. The DMA will present Dallas-based Francisco Moreno’s immersive installation Chapel for the first time in a group show called For a Dreamer of Houses. Dallas Contemporary’s spring exhibitions, which include the work of photographer Paolo Roversi and designer Vivienne Westwood, will explore the intersection of fashion and art.

Mark your calendars–the third weekend of April is looking like a busy one.