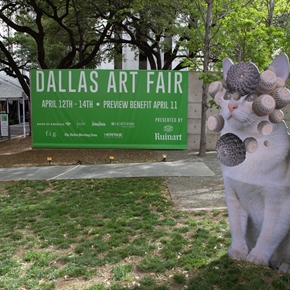 On Thursday afternoon during the Dallas Art Fair, a man in a 10-gallon hat walked into a hotel bar in downtown Dallas, ordered a glass of $300-a-bottle scotch with “one rock” (a single ice cube), and lifted his cell phone to his ear.
“Oh, don’t worry about it, honey,” I heard him say. “I’ll just send the plane to get ’ya.”
This casual encounter with a man with a private jet underlines why, despite a glut of art-world events, people still make room for the best little art fair in Texas. Artists don’t have the inventory to fill another dozen fair booths from Dubai to Madrid to Mexico City, not to mention biennales in Venice, Gwangju, São Paulo, and beyond. Galleries are so cash-strapped that increasingly expensive fairs had to lower booth costs not to lose them.
So if collectors, curators, dealers, and journalists are all cutting down on the number of stops they make on the intercontinental picture-buying hajj, why, then, does the art world keep coming to the Dallas Art Fair? Simply put, there’s still oil to be struck here in Texas. 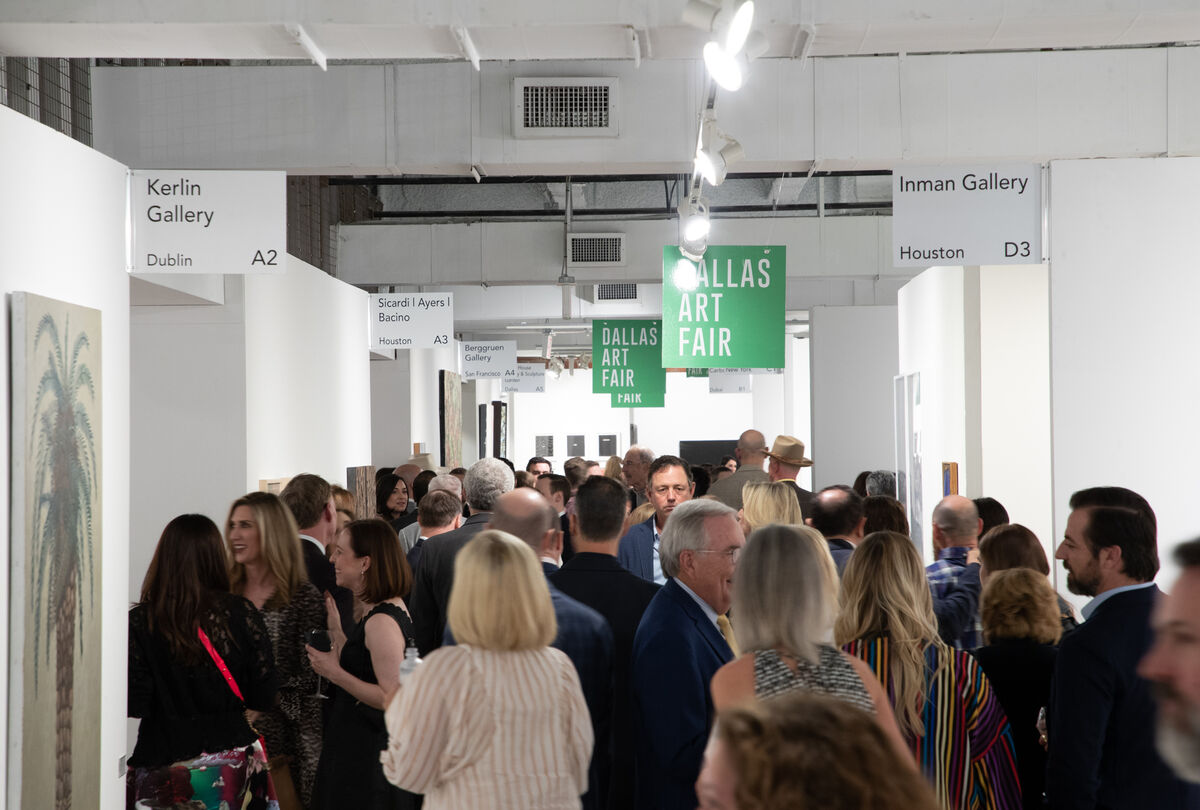 “There are so many businesses coming to Dallas, it’s relatively recession-proof,” Kelly Cornell, the fair’s director, told me in an interview in her office. “We have huge technology companies; we’ve got Toyota now, and a giant AT&T complex that’s happening just down the street. Accordingly, there’s the mega-collectors that they really want to connect with and have the opportunity to meet. We’re very fortunate that the big collectors in Dallas are really supportive of the fair, and they show up—and come every day, most of them. That’s huge.”
We live in a world where people need gas and cell phones, and two of their biggest suppliers—ExxonMobile and AT&T, respectively—are headquartered in the Dallas area. Texas is responsible for 20 percent of all U.S. exports, more than any other state in the union, and Dallas–Fort Worth International is the state’s most trafficked airport. In 2014, Dallas was named the country’s top city for millionaire growth, and once Texans get that money in the bank, they tend to keep it: The famously self-assured land of spurs and swagger has no state income tax. The world’s most valuable sports franchise is the $5-billion Dallas Cowboys, and its stadium is studded with works by
Ellsworth Kelly
,
Jenny Holzer
,
Mel Bochner
, and
Wolfgang Tillmans
. 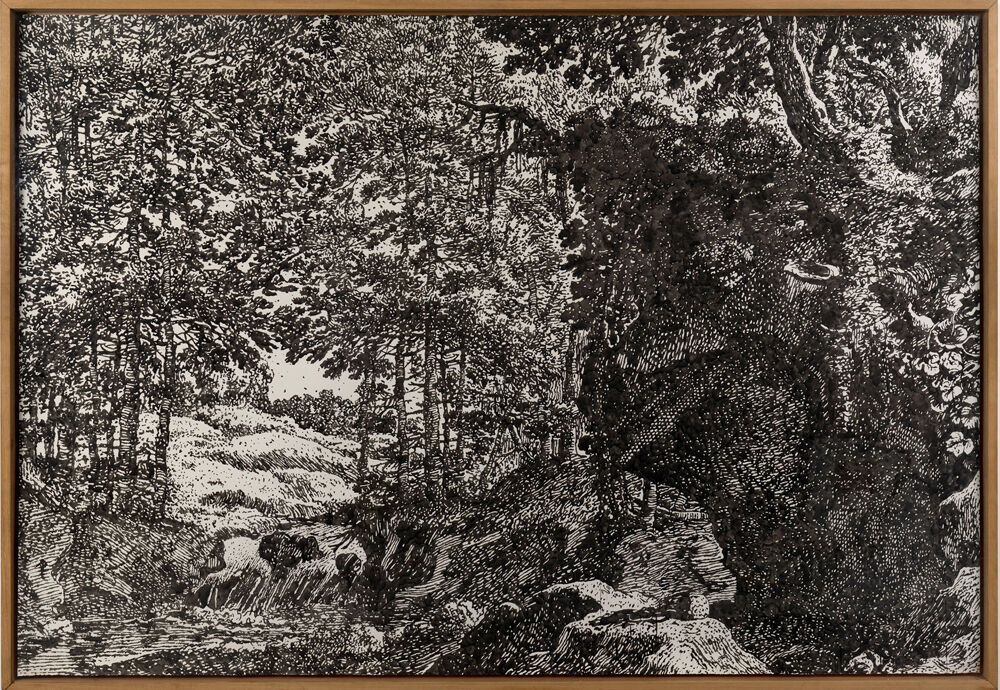 Ugo Rondinone
VIERUNDZWANZIGSTERJUNIZWEITAUSENDUNDDREI, 2003
Sadie Coles HQ
The state of Texas, where billions of barrels of oil still lay drillable beneath the earth, has a network of art collectors that galleries can ignore at their own peril. And along with the annual charity auction TWO x TWO for AIDS and Art, the Dallas Art Fair is its biggest art event of the year. It brings together the local collectors who have built world-class collections that fill private museums here—the Power Station, the Pump House, the Warehouse, the Karpidas Collection, etc.—as well as those who sit on the boards of the Dallas Museum of Art (DMA), the Nasher Sculpture Center, and Dallas Contemporary.
The DMA has been promised the collections of Marguerite and Robert Hoffman, Cindy and Howard Rachofsky, and Deedie and Rusty Rose, meaning it will soon have one of the country’s most enviable holdings of post-war and contemporary art. The Dallas Art Fair Foundation Acquisition Fund allowed the DMA to purchase eight works from eight galleries ahead of the fair, meaning nearly 10 percent of the exhibitors saw one of their works go immediately into the collection of a world-class museum. Dealers said there was a lot of interest in works from the museum’s trustees, who could donate them as promised gifts. Knowing all this, dealers will travel across the country for the chance to have the DMA acquire their artists’ work.
“Obviously the Dallas Museum has large, large gifts coming to it, and people are buying works that are immediately gifted, as well, so that type of relationship between the museum and the fair is very important,” Cornell said. “We’re very close with the board members at all the museums. Dallas is a tight-knit community, and we work with them on a year-round basis.”

Londoners in the Lone Star State 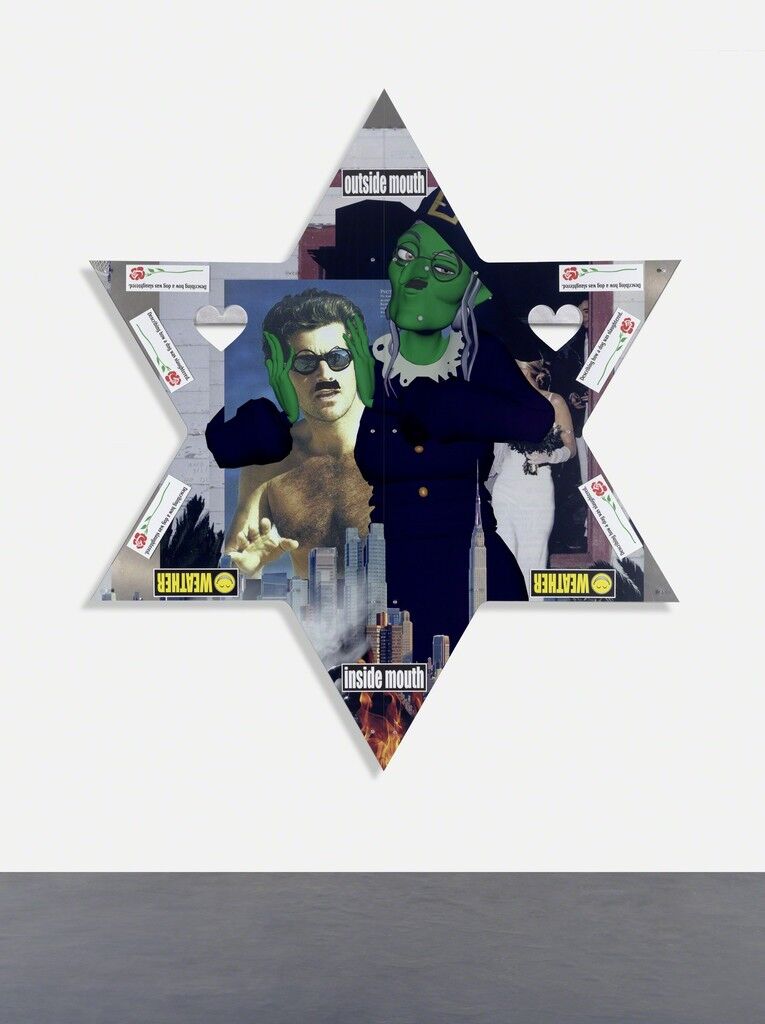 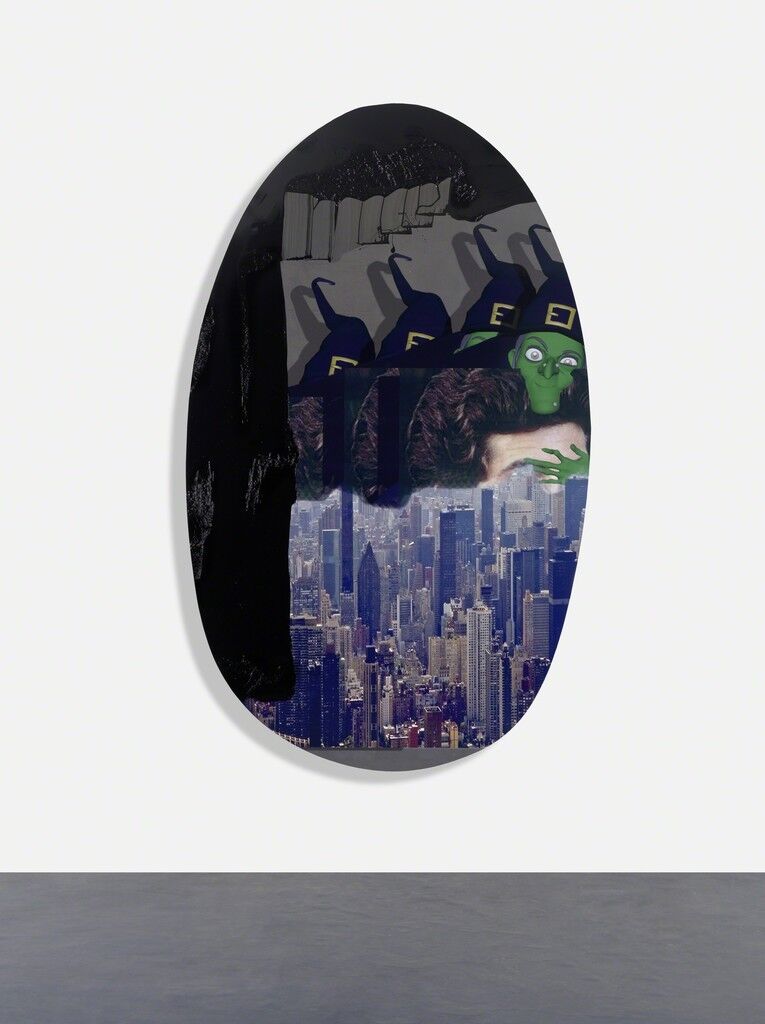 Jordan Wolfson
Untitled, 2019
Sadie Coles HQ
Sure enough, some of the European galleries that came to Dallas for the first time this year achieved six-figure sales. One gallery that found success in Texas was Sadie Coles HQ, the London outfit with a deep artist roster that participates in many of the biggest fairs—the Art Basels, the Friezes, and West Bund in Hong Kong—but was doing Dallas for the first time. Things went well, as the gallery sold works for as much as $250,000 by artists including Laura Owens,
Ugo Rondinone
,
Jim Lambie
, and
Jordan Wolfson
, who had flown in for the occasion, having never before been to the state.
“It’s a much smaller fair than what we usually do, and it’s much more local, but that’s very nice, actually—it works in its favor,” Liselotte Seaton, a director at Sadie Coles, said in the booth. She added that while several local collectors had come by specifically to see them, they also met several new clients, all from the area. Asked whether the gallery would do the fair again, Seaton was noncommittal, saying they could only do so many Dallas-sized fairs per year, as their artists simply don’t have the bandwidth to create that much work.
Another Dallas newcomer this year was Lisson Gallery, which has been one of the most vital galleries in London for more than five decades, and in recent years, it has added a pair of spaces in New York’s Chelsea neighborhood. It, too, is a perennial fixture on the fair circuit, and the presence of works by its artists—including
Anish Kapoor
,
Ryan Gander
, and
Cory Arcangel
—lent the proceedings some international flair. Lisson came in swinging—gallery artist
Pedro Reyes
was in town for the weekend, and another of its artists,
Haroon Mirza
, has gotten a lot of attention in Texas for Stone Circle (2018), an installation in the art mecca of Marfa consisting of a druidic arrangement of boulders that emit light and sound. 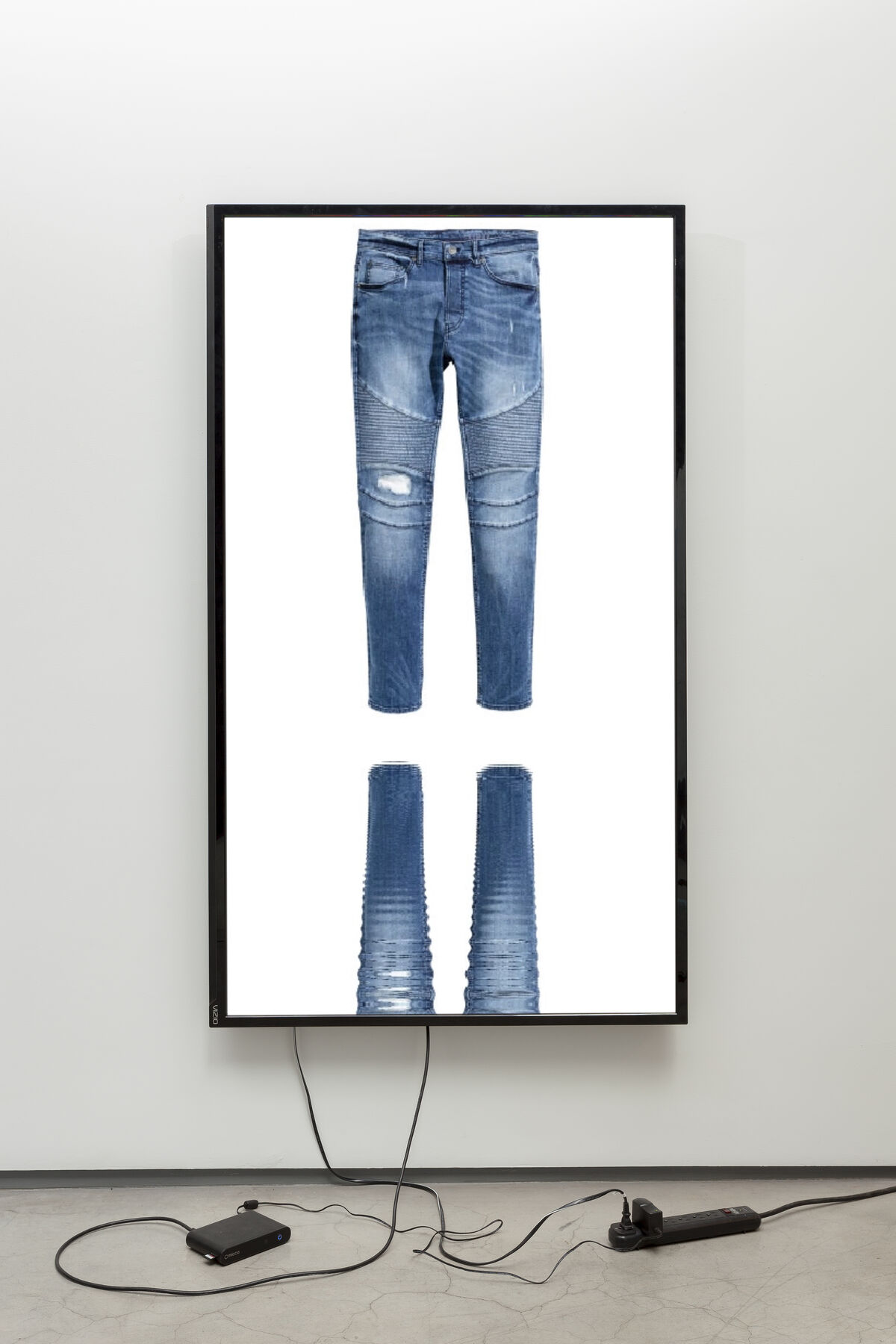 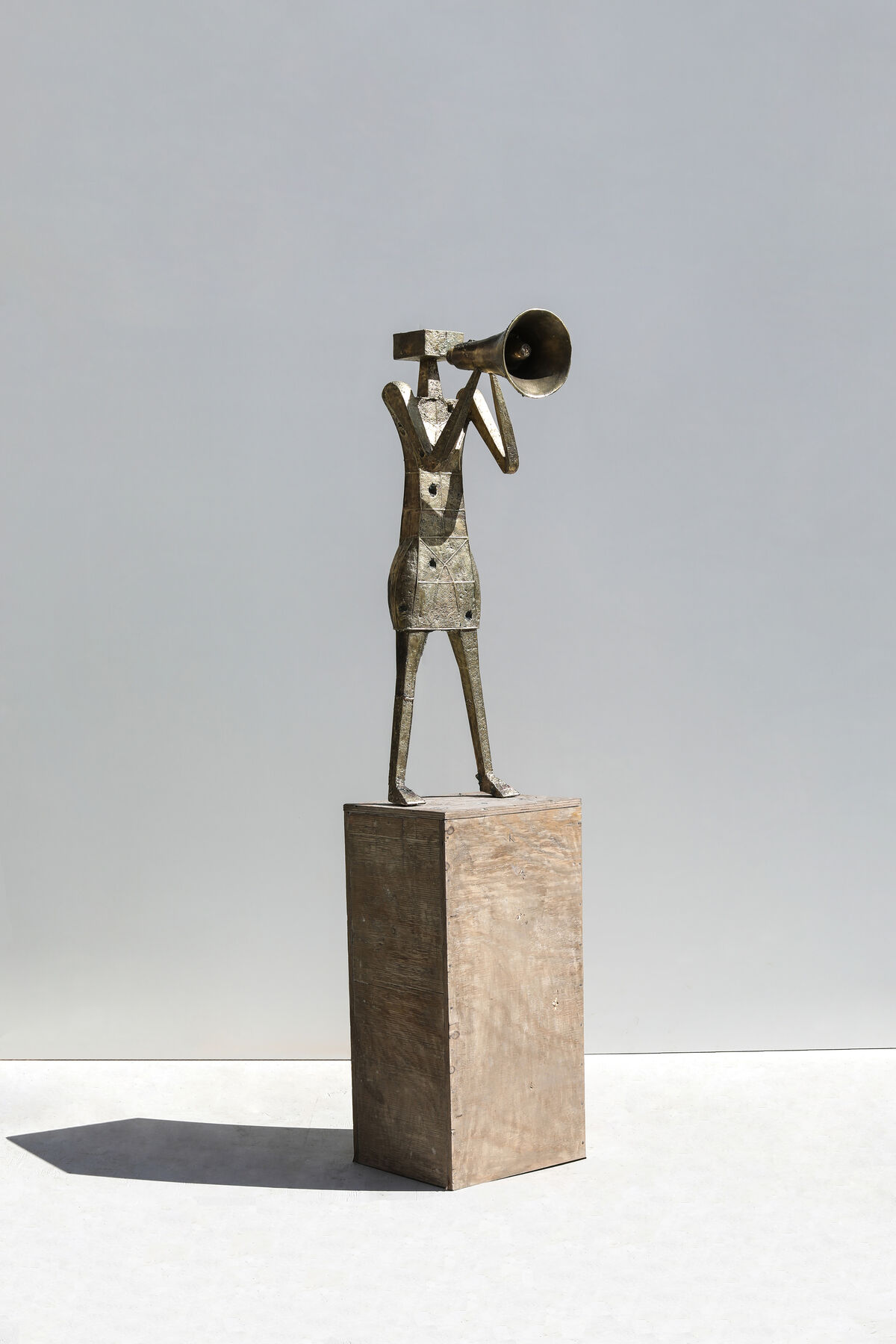 “We’re hitting Texas hard,” said Caroline Mattis, a sales associate at the gallery. “There’s a lot of important collectors here, and we wanted to show off our program.”
The collectors here seemed to be biting, as Lisson sold Arcangel’s Jeans / Lakes (2016) for $60,000, Reyes’s Protester III (2018) for $50,000, and three
Stanley Whitney
gouaches for $18,000 each.
When asked why the gallery added Dallas to the long list of fairs it pays for a booth at, Mattis said, “Lisson’s only been in New York for three years, so there are a lot of people in America we haven’t reached yet. It’s important to do the smaller American fairs, the more regional fairs.”
As for why the gallery specifically chose Dallas for its first regional American fair, Mattis cited the usual reasons: It has a critical mass of collectors the gallery already knew, and, given its economic profile, a whole lot more they would like to know better. 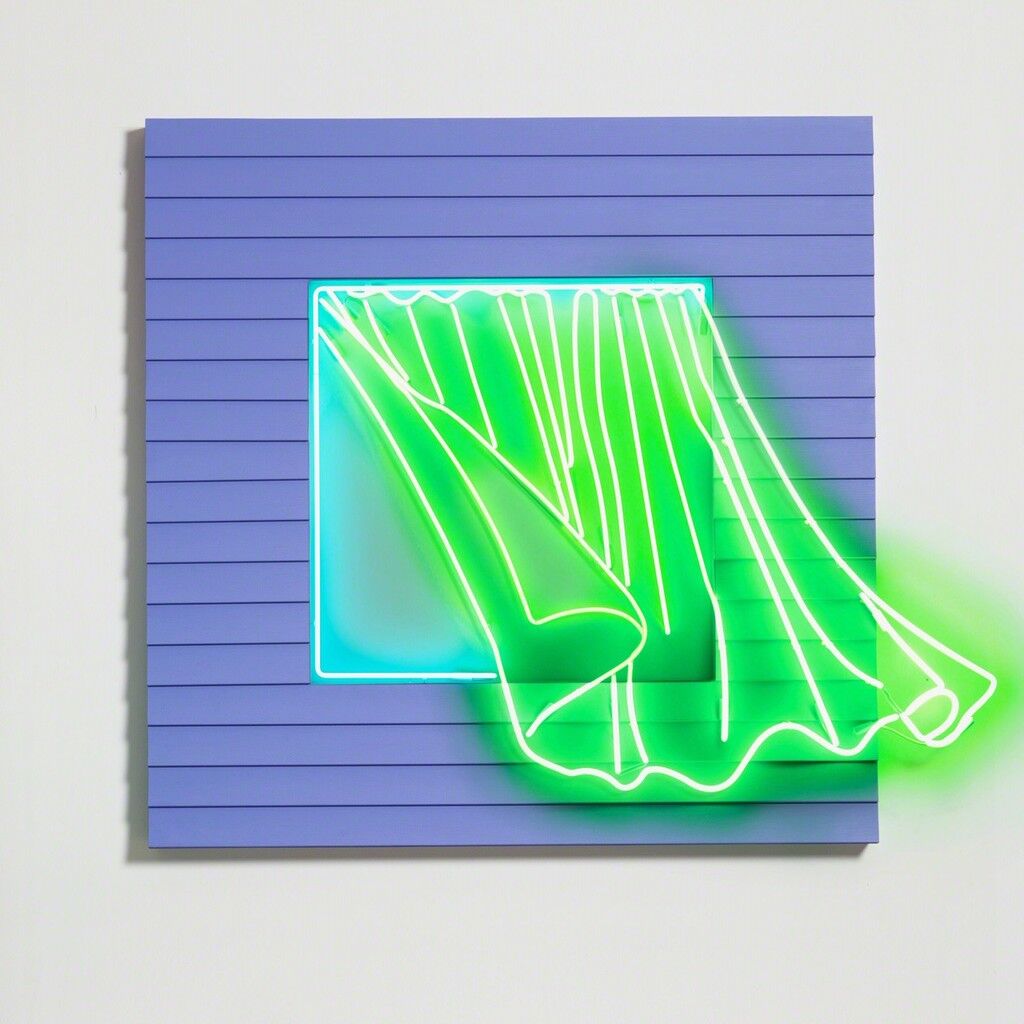 Alex Da Corte
Unquiet Grave, 2019
Karma
Another Dallas Art Fair exhibitor from London was the difficult-to-Google Mayfair gallery State. The gallery brought a $950,000
George Condo
painting and a $775,000
Robert Rauschenberg
painting, both of which went unsold. Director Jamie Gourlay admitted it might have been “a little too ambitious for Dallas, perhaps a little too expensive.”
And yet, by the end of the third day of the fair, State had closed on a deal to sell a Kapoor work for $650,000. It was among the biggest sales reported at Dallas Art Fair this year, which also included a 1979
Richard Diebenkorn
gouache-on-paper, purchased by a Dallas collector for a figure between $200,000 and $250,000 from the booth of Van Doren Waxter.
Two galleries found success with works by artists who will be in the central exhibition of the Venice Biennale next month: New York’s Karma gallery sold the magnificent
Alex Da Corte
neon work Unquiet Grave (2018), and Los Angeles’s Ghebaly Gallery found a buyer for a work by
Neïl Beloufa
. 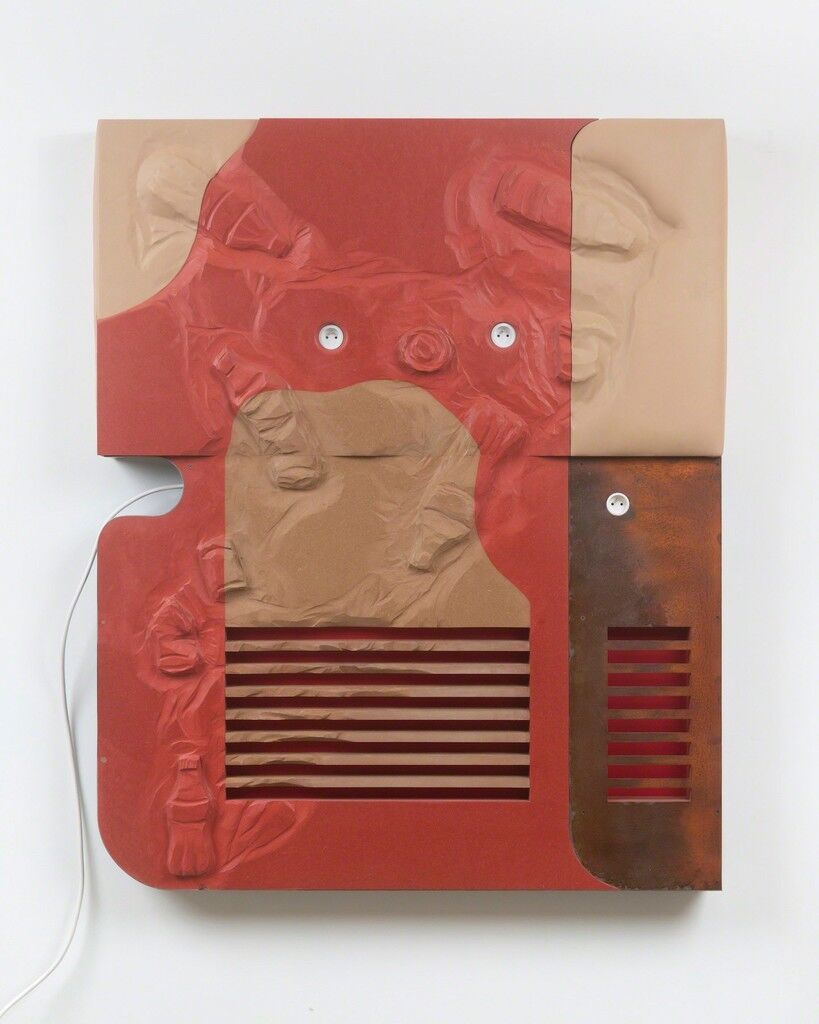 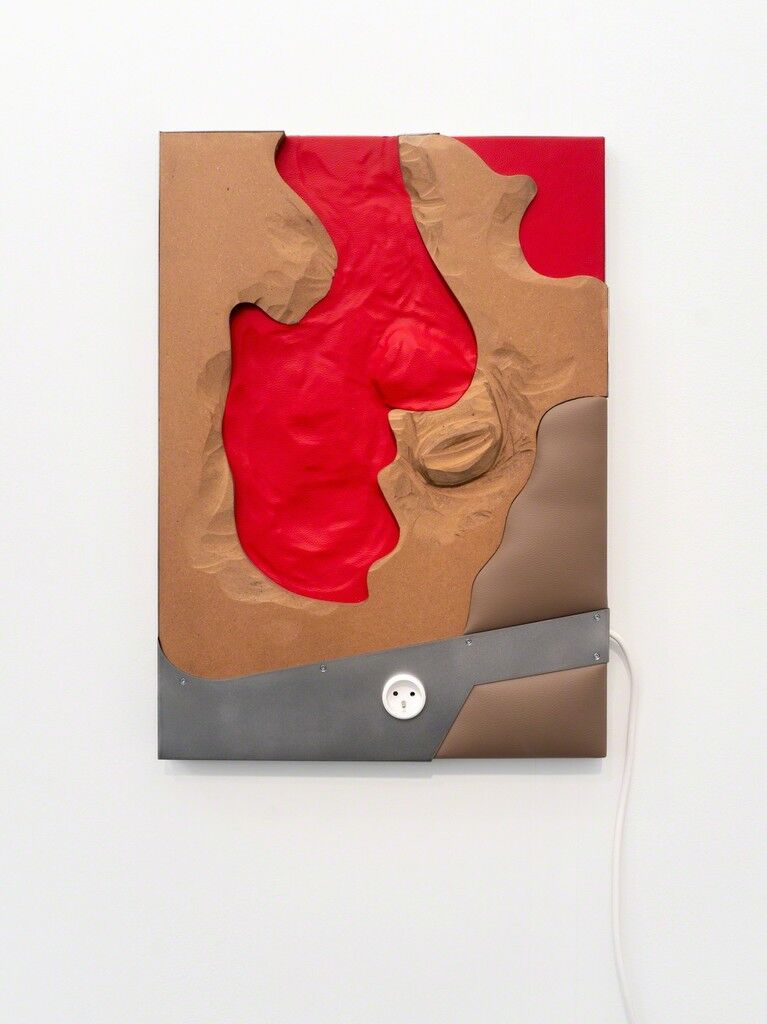 Neïl Beloufa
Can on Red, 2019
François Ghebaly
It should be pointed out here that even if Dallas is “recession-proof,” its nearly 100-gallery art fair may not be the most objective indicator of the health of the global markets—it is just a small piece of a larger puzzle. The money spent here is dwarfed by a juggernaut like Art Basel in Hong Kong, where some 240 galleries fill a sprawling convention center that plays host to an entire continent of collectors. At the upcoming auctions in New York, more than $1 billion worth of art will be up for grabs.
But it’s an attractive fair for those who have shored up connections with the state’s collector-lined hamlets, like Preston Hollow (home to Howard Rachofsky and the up-and-coming collecting couple Joe and Kristen Cole, not to mention Mark Cuban, T. Boone Pickens, and former U.S. president George W. Bush). Simon Lee Gallery, which has outposts in New York, London, and Hong Kong, has done the fair many times before, and director James Shaeffer comes down to the city as many as four times per year—not unusual for dealers and advisors in New York and Los Angeles, both about a three-hour flight away. Accordingly, the gallery sold several works by
Clare Woods
in the range of £12,000 to £42,000 ($15,700 to $54,900). Not only was the artist present in the booth for much of the fair, she has 13 tile works permanently installed at River Bend in the city’s Design District, an initiative spearheaded by fair chairman John Sughre, which plays host to 214 Projects, a permanent exhibition space for the fair. Dallas Art Fair stalwarts Canada and Moran Moran staged a joint booth to show work by an artist they both represent,
RJ Messineo
, and sold paintings to collectors from Dallas and New York. 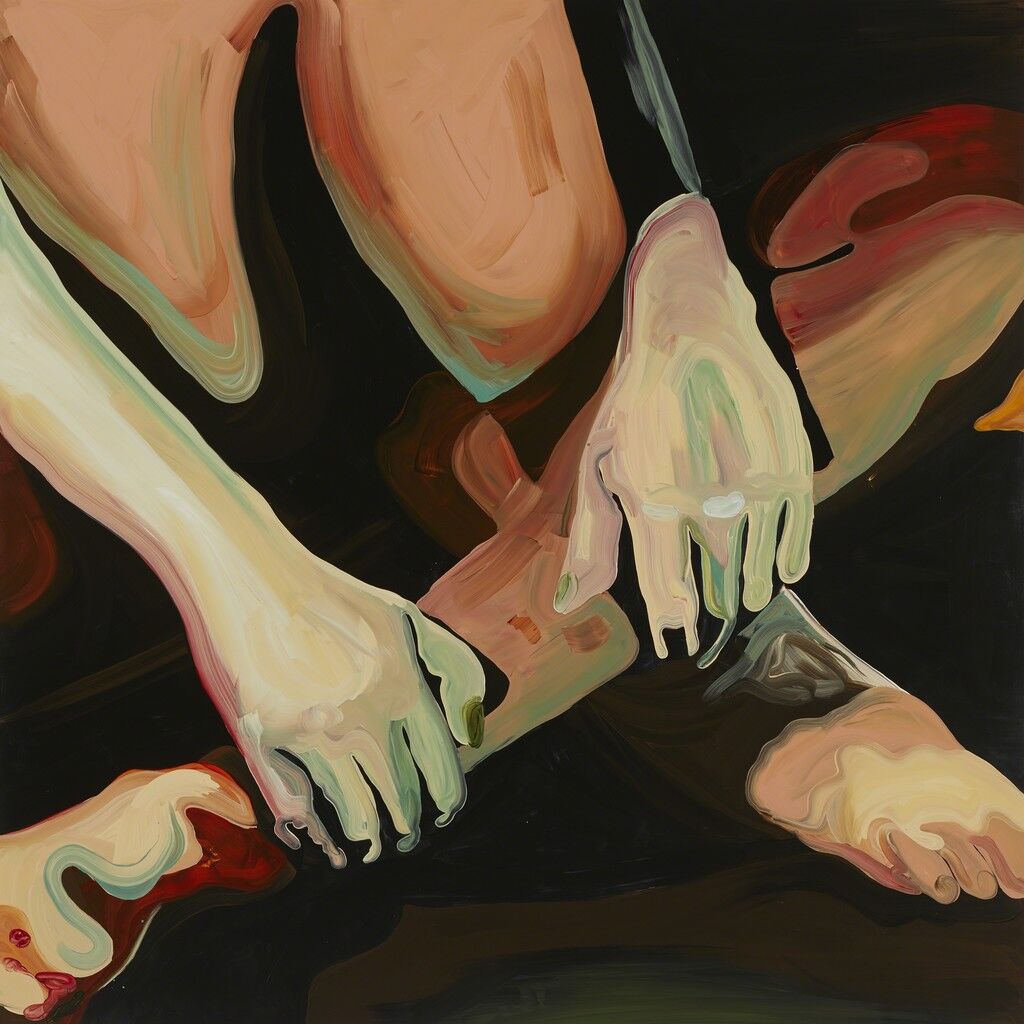 Clare Woods
The First and the Last, ca. 2018
Simon Lee Gallery
Paris’s Frank Elbaz has committed to the city in a different way: In 2016, 14 years after opening his first space in the Marais, Elbaz opened a second gallery in Dallas. The connection appears to have paid off: Before the fair even opened, the DMA, through the Dallas Art Fair Acquisitions Program, acquired a yarn work by
Sheila Hicks
, the Paris-based American textile artist whose solo show at the Nasher opens in May.
Another beneficiary of the DMA’s largess was Rachel Uffner Gallery: A year after the museum acquired a work by
Shara Hughes
from Uffner’s booth, it bought a dazzling portrait by
Arcmanoro Niles
, the young Brooklyn-based artist who currently has a show up at Uffner’s Lower East Side gallery.
“I don’t think they want to give the acquisitions prize to the same gallery two years in a row, but also, I kind of brought this painting specifically for the DMA,” Uffner said in her booth. 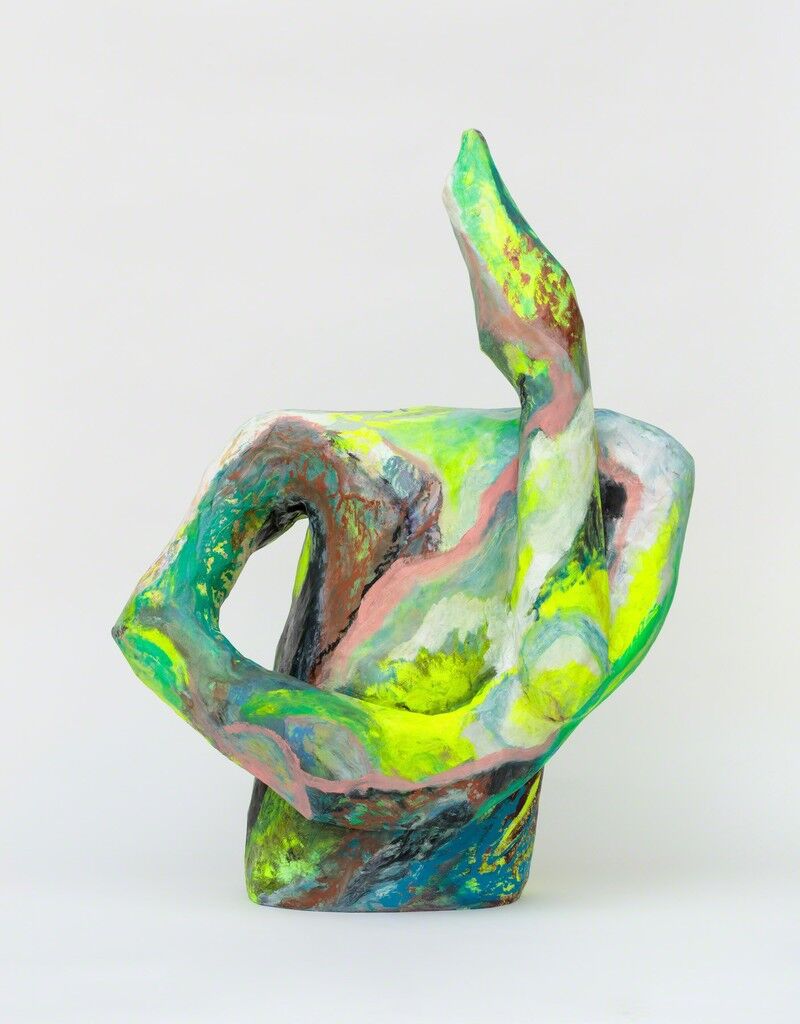 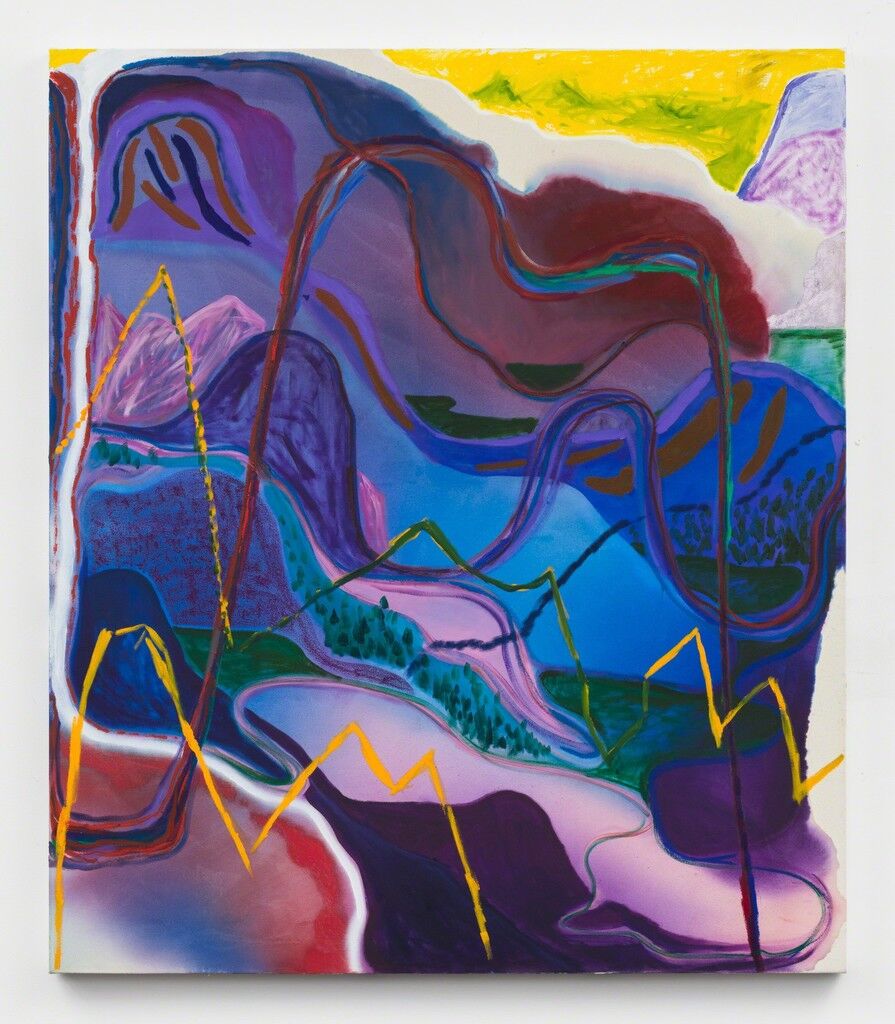 Shara Hughes
Weeping Blur, 2018
Rachel Uffner Gallery
She added that the museum currently has the Hughes painting it acquired last year up in the permanent collection galleries. “The collectors like when the DMA buys a work because it stays in the city,” she said.
Prices in Uffner’s booth were as high as $45,000, and nearly everything sold, she said; two new works by Hughes went to Dallas collectors. She was also showcasing new sculptures by
Bianca Beck
, and added that Rachofsky, the local collector, had acquired a much larger work by Beck that wouldn’t fit into the booth. By Friday, it was installed in Rachofsky’s office.
As the fair went into the weekend, collectors kept streaming in, and on Sunday, visitors stuck around until the final hours. Some also swung by the Eye Ball, an annual party that takes place under
Tony Tasset
’s gigantic sculpture of a human eye. And then, the collectors packed it in, some heading home by car to places such as Preston Hollow, while others got in “the plane” and went somewhere deeper in the heart of Texas.
Click to View ArticleDownload PDF