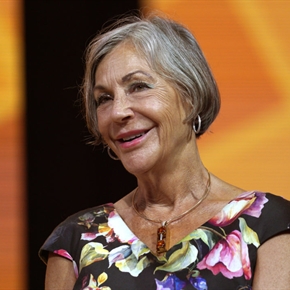 10 Influential Texas Collectors Who Are Setting the Tone for the State’s Art Scene - April 12, 2019

Texas does everything big. And appropriately, the Lone Star State has some of the richest people in the world—as well as some of the most important art collections in the United States. To mark the opening of the Dallas Art Fair (April 11–14), we took at look at some of the state’s most prominent collectors. “We always look forward to seeing some of our favorite galleries from around the world in Dallas for the fair,” Thomas Hartland-Mackie says in an email to artnet News. The Hartland-Mackies, who are among the youngest collectors on the scene, are also among the most voracious. The barely 30-year-old Thomas is the CEO and president of City Electric Supply, an electrical parts manufacturer and wholesaler founded by his grandfather started in the UK. Nasiba (née Adilova) runs The Tot, an e-commerce site for baby products (think clothes, toys, and furniture). Together, they collect exciting contemporary artists like Neïl Beloufa, Alex Da Corte, Cory Arcangel, Jordan Wolfson, Ugo Rondinone, and Jean-Michel Othoniel (whose work greets visitors to the Hartland-Mackies’ Dallas restaurant, Bullion).

“Some of the galleries whose programs we watch closely such as Karma in New York, François Ghebaly in Los Angeles, and Perrotin in Paris and New York have been doing the fair for a number of years and it’s great to catch-up and see their enthusiasm for our city,” Thomas says. “The fair is a special opportunity to have in-depth conversations with them about their artists and to experience works in person that otherwise we might only see via JPEG.” Laura and John Arnold are quite busy with Arnold Ventures, a political action LLC that gives grants to reproductive rights groups, criminal justice reform organizations, and nutritional science initiatives. In contrast to their philanthropic undertakings, very little is known about their supposedly vast art collection. Asked by the Houston Chronicle about what works he had displayed in his office, John Arnold said: “a Baroque painting by Checo del Caravaggio [sic] of the Penitent Magdalene, another Baroque piece by a Flemish artist of a troubled man trying to get cured by the bishop, and then a couple of African sculptures.” The article also mentions works by Tara Donovan and Chuck Close, while a Larry’s Listmini-profile mentions Willem de Kooning and Pablo Picasso. David J. Haemisegger and Nancy A. Nasher at the Northpark Center. Courtesy of AIA.

Nancy Nasher comes from a line of art collectors. Her parents, Raymond and Patsy Nasher, collected sculptures by Joan Miró, Alexander Calder, and Isamu Noguchi, eventually founding the Nasher Sculpture Center. Together with her husband, David Haemisegger, with whom Nancy owns the art-filled luxury mall, NorthPark Center, she has built a formidable collection of her own. The duo revealed the works in their collection during a 2016 show at the Nasher Museum at Duke University in Durham, North Carolina, which featured work by Huma Bhabha, Damien Hirst, Kerry James Marshall, Kara Walker, Kehinde Wiley, and Christopher Wool, among many others. “It was all around us,” Nasher told Dallas’s NPR station in 2013 about growing up with collector parents. “It was in the kitchen, it was down the hallway, it was under my bed, it was outside my window. But more importantly, as each piece of art came in, they were so excited about it. And I think they knew that the joy that art gave to them—and they were such believers in education—that they wanted to share that joy with others.” Dr. Harmon Kelley, who has amassed a collection of African American art with his wife Harriet. Photo courtesy of Southeast OBGYN Associates.

According to a profile in the San Antonio Express-News last year, Harriet and Harmon Kelley started collecting when they decided on a Horace Pippin work over a Ferrari. Over the next few years, Harmon, a prominent OB-GYN at the University of Texas Medical Branch, and Harriet, a biologist, built up a masterful collection of work by African-American artists. In addition to the Pippin—a piece from 1936—the Kelleys also own works by Charles White, Allan Rohan Crite, Archibald J. Motley Jr., Jacob Lawrence, Romare Bearden, and Alison Saar. “I’m sure I would have gotten tired of the Ferrari,” Harmon Kelley told the Express-News. Though the Houston Chronicle reported that Alice Walton sold her family’s 1,460-acre ranch in Millsap, Texas, in 2015 to an investment group, the third-eldest heir to the Walmart fortune spends a good portion of the year at her home in Ft. Worth. Walton came to art collecting when she was 10 years old when she purchased a Picasso reproduction at a Ben Franklin’s pharmacy. Now, she is the force behind the Crystal Bridges Museum of American Art in Bentonville, Arkansas (the town is also the headquarters of Walmart), where she displays works by Edward Hopper, Tom Wesselmann, Andrew Wyeth, John Singer Sargent, Winslow Homer, and Norman Rockwell, among others. “Collecting has been such a joy, and such an important part of my life in terms of seeing art, and loving it,” Walton told The New Yorker. “And I was absolutely fascinated by the view of American history that art gave me. It was much more real to me, and much more closely tied to the political and social context of the country, and the changes, when I saw it through the eyes of the artists.” “Art is as essential as breathing, and drawing is the medium that gives life to art,” Louisa Stude Sarofim said on the occassion of her promised gift of 55 works on paper to the Menil Collection and Foundation in 2016. She has been one of Texas’s most prominent art patrons for years. Currently, she holds a position as the chair and life trustee of the Menil. The heir to the Brown & Root engineering company—and the ex-wife of billionaire Fayez Sarofim (she received a reported $250 million in the divorce settlement)—has promised the Menil works by Eva Hesse, Ellsworth Kelly, Magdalena Abakanowicz, Robert Rauschenberg, Helen Frankenthaler, Robert Gober, and Rachel Whiteread.