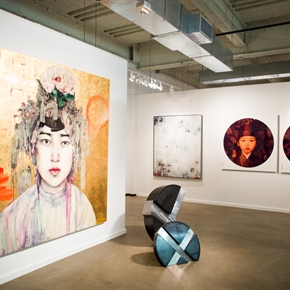 It's a festival kind of weekend in Dallas, with ones focusing on film, music, and art dominating the calendar. You'll also have a chance to catch concerts by classic and current musicians, two new local theater productions, a live version of a throwback kids game show, and a unique art installation.

Below are the best ways to spend your free time this weekend. Want more options? Lucky for you, we have a much longer list of the city's best events.

Thin Line Film Festival While there's a much bigger film festival happening in Dallas this weekend, film lovers should not dismiss the Thin Line Film Festival in Denton. It's a five-day event where visitors can enjoy world-class international documentary films, nightly live music, and photography from around the world. The festival will take place at various venues in Denton through Sunday.

George Thorogood & The Destroyers in concert The title of George Thorogood and the Destroyers latest tour, "Good To Be Bad: 45 Years of Rock," is slightly confusing since their self-titled debut album was released in 1977. But whether they're jumping the gun or not on hitting 45, the group led by Thorogood has rocked for a long time, churning out hits like "Bad to the Bone," "Born to be Bad," and "Get a Haircut." They'll play at House of Blues Dallas, with $1 from each ticket sold going to the Leukemia & Lymphoma Society.

Dallas Art Fair The Dallas Art Fair offers collectors, arts professionals, and the public the opportunity to engage with a rich selection of modern and contemporary artworks presented by leading national and international galleries. Kicking off with the Preview Benefit on Thursday, which benefits the Dallas Museum of Art, Nasher Sculpture Center and Dallas Contemporary, the fair will take place through Sunday at Fashion Industry Gallery.

Dallas International Film Festival The 2019 edition of the Dallas International Film Festival will feature over 130 films over the course of eight days, with screenings taking place at Magnolia Theater, West Village in Uptown Dallas, Studio Movie Grill, Royal Lane, and Dallas Museum of Art. Highlights include opening night film Extremely Wicked, Shockingly Evil and Vile, the documentary Running with Beto, and Her Smell starring Elisabeth Moss as a fading punk rock superstar. The festival will go through April 18.

Undermain Theatre presents so go the ghosts of méxico, part three As part of Undermain Theatre's Whither Goest Thou America Festival, they'll present the centerpiece production of so go the ghosts of méxico, part three. The final installment in Matthew Paul Olmos' three-play cycle exploring the U.S./México drug wars, it follows a young Méxican couple who get caught up in the web of the drug trade between the two countries, changing their lives forever. It will play through May 5, with the first two installments being put on as staged readings as part of the festival on May 1 and 2.

Kitchen Dog Theater presents Wolf at the Door Kitchen Dog Theater will present the NNPN Rolling World Premiere of Wolf at the Door by Marisela Treviño Orta. In this dark fairy tale, Isadora finds the strength to stand up to her abusive husband Septimo when he forces the very pregnant Yolot to stay against her will. While Septimo makes plans for the baby, Isadora and Yolot devise one of their own. The play will run through May 5 at Trinity River Arts Center.

Brandi Carlile in concert Brandi Carlile is one of those singers whose reputation goes way beyond the actual success she's had in the music industry. Unlike some overnight success artists, Carlile has put in a lot work in her career, releasing five albums dating back to 2005 before she finally broke through with 2018's By the Way, I Forgive You, which earned her three Grammy Awards. She'll play at The Bomb Factory with Savannah Conley.

Eric Church in concert It didn't take long for country singer Eric Church to get to the top of the mountain in the genre. His 2006 debut album, Sinners Like Me, made the top 10 on the Country charts, and he's hit No. 1 or 2 with his last four albums, including 2018's Desperate Man. With lots of hits to draw upon, like "Drink in My Hand," "Springsteen," "Give Me Back My Hometown," and "Round Here Buzz," he'll have plenty to give his fans during two shows — one Friday and one Saturday — at American Airlines Center.