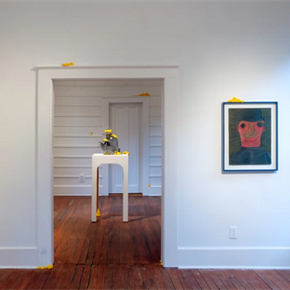 A Legendary Brooklyn Artist's First Show in Texas is a House Party Without Parents - April 17, 2018

There was a humid weirdness hanging around downtown Dallas last Friday. It didn’t help that it was the 13th of the month, or that Mercury was in retrograde, or that there was a three-story bloodshot eyeball hovering outside my window. Tony Tasset’s fiberglass sculpture, sitting in a lot across the street from my hotel room, hadn’t blinked in three days and it was starting to get to me. Downtown Dallas is well manicured and mostly deserted; everyone lives in the city’s wealthy exurbs, a cab driver told me, and people rarely hang out around this way. No one was stalking the floors at the Neiman Marcus next door when I visited around lunchtime, except maybe ghosts. A day earlier, in another cab, the driver asked if I wanted to see “where JFK got it.”

The Cedars is only a five-minute drive away, barely far enough to count as another neighborhood, but it feels like another planet. Lawn signs advertising the worship times at the local First Baptist punctuate front lawns. You can’t accuse Dallas of not having a sense of humor, I thought, as I walked by a friendly-looking dive called Lee Harvey’s Dog Day Afternoon. A few doors down is a 1920s-era clapboard shotgun with a concrete front porch and corrugated steel gate; one of the last of its kind, it was recently refurbished and was serving last Friday night, improbably, as the venue for Brooklyn-based artist Nicole Eisenman’s first-ever installation in Texas. Eisenman, age 53, has always been interested in what we do at home when no one is watching, and here she had taken the setting literally, giving us the chance to consider a domestic space whose value might otherwise be overlooked, or razed, or gentrified.

Eisenman’s work in Texas was being presented by One Night Only, a curatorial project by the Dallas-based artist Arthur Peña. Peña makes paintings, but he’s also a kind of cultural fixer, involved in music labels, studio development, and myriad other things—when Coach wanted a resident emissary to inaugurate its store in NorthPark Center, they rang Peña.

Hung inside the house were several painted wooden relief sculptures, one meant to evoke a self-portrait by the German Expressionist Erich Heckel, the others likenesses of Eisenman’s family and friends. All were done in her recognizable style: funny little Picasso-inflected faces and whorling navy bean heads. One wore a Mets cap. Toward the back, a cast aluminum and paper pulp sculpture titled Egg-Eater sat on a plinth, as if he was nominally the house’s inhabitant, and we’d caught him mid-bite. Off to the side, through a peephole drilled eye-level into the door of the powder room—what Peña called “Dallas’ smallest bathroom”—visitors came upon another Eisenman character, romancing herself, legs akimbo—a graphic Étant Donnés, both in form and intensity. Eisenman has never been bashful about depicting the female gaze of the female body.

The whole proceeding had a distinct house party vibe—almost like being inside Eisenman’s 2015 celebratory painting Another Green World—with the city’s local artists mixing with out-of-town gallerists, drifting into the home and out onto the front lawn again, fishing for a cold drink in the makeshift bar: a plastic garbage can filled with ice and cans of Modelo. We were here because of Eisenman, but one gets the feeling that the work was more of a bonus than the point.

“Of course when I [was] passing out these invitations and sending out RSVPs, a lot of people were kind of like, What? What is this? How is this happening? Like,Nicole Eisenman?” said Peña. “Part of that is the fact that this is her first solo show in Texas, which is kind of phenomenal to think about, but it’s happening in this place where she wanted to have that conversation. That was her draw as well.”

In a week when we were asked to contemplate the implications of a social network run amok, there was something urgent here, and also comforting, about an analog version being traced in this stubby little shack on a dimly-lit back road in Texas. The one night only disclaimer is, technically speaking, not entirely accurate; Eisenman’s installation remains on view through the end of the month, by appointment only. But in a sense, the ephemerality was entirely the point. In the end, it was about being there, however briefly.

Nicole Eisenman’s installation is on view through April 25. To receive location details, please RSVP to onenightonlydallas@gmail.com.