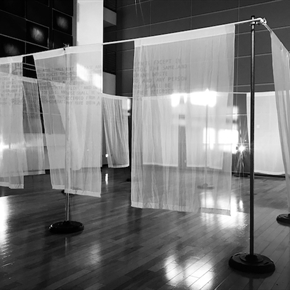 In its second year, the Vignette Art Fair in Dallas, an alternative art fair held during the Dallas Art Fair week at the Women’s Museum in Fair Park, showcased more than 70 female and female-identifying artists and social practitioners from around the state over the past weekend. The Women’s Museum is an apt choice for this exhibition in name, yet the building poses challenges. The vast architecture of the Deco building means that, for an art fair this untested and emergent, it’s a difficult space to fill. The dismantled remnants of its former use as a historical museum compete both physically and conceptually with whatever work is on display. It’s also challenging for curators and installers, since works cannot be nailed or screwed into the walls.

Criticisms from last year’s iteration included too few works, not maximizing the interior space’s potential, and uneven quality of work. Vignette’s organizers worked to address those issues in this year’s exhibition. There were three curators this year: Erin Murphy from the San Antonio Museum of Art, artist Dee Lara, and video curator Jessie Moncrief. Murphy was responsible for the fair’s selection of 2D & 3D works. This survey featured almost twice as many artists as last year, working in a variety of techniques and media. There were plenty of interesting works, but as a whole this part of the fair lacked cohesion. The restrictions for hanging and installation detracted from the professionalism of this aspect of the show.

Some of my favorite works were by the “Venture” artists. As the Venture Curator, Dee Lara chose artists whose work explores current socio-political issues. These artists’ works were primarily multi-media and installation. This work tended to seem more integrated within the architectural space, and the way the works followed an instinctive path also took into consideration how the viewer navigates the building.

I was thrilled that there was a dedicated video curator this year, but, really, the videos, dotted throughout the building and tucked into side rooms, often felt lost in the cavernous space. The monitors were too small and there wasn’t any seating available for viewing. Perhaps next year, turning a few of the rooms into dedicated video screening rooms with seating could solve this concern.

I applaud Jin-Ya Huang’s social practice project working with Syrian refugee women to cook food and share stories with community as an effective and practical way of breaking boundaries. This initiative is making an impact in many people’s lives. The food was delicious and the stories were moving.

While I appreciate the desire to support women-owned businesses, I wonder whether having retailers sell their wares at the exhibition was a wise decision. At the risk of sounding elitist, that model is one that many visitors associate with craft fairs, which could backfire if the goal is to get the art-world patrons and collectors to pay attention to these Texas women artists.

On Saturday, at the Nasher panel discussion Going Rogue: Alternative Art Fairs, visiting panelists Elizabeth Dee, Manuela Mozo and Nicola Vassell discussed their missions with their own non-traditional fair exhibitions. All of them have dedicated curators who work together with specific themes and select artists, and/or gallerists if applicable, to create site-specific projects. Going forward, what if Vignette moved away from the regionalized survey, and curators worked together on a conceptual theme, and artists proposed site-specific projects addressing the theme and responding to the myriad of spaces, architecture and history within the museum? We need to go a lot more rogue.