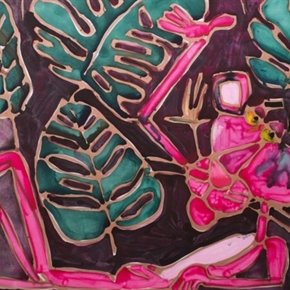 Does it seem like the least exciting thing about the Dallas Art Fairis the Dallas Art Fair itself? With the proliferation of additional events, performances, and art installations that beckon non-collectors, perhaps it’s time to match the new energy and refocus your Art Fair-going priorities. Those tangential openings and parties are already in effect; we have this guide to the busiest 10 days in the Dallas art world. The fair, in its 10th year, begins Friday and runs through Sunday.

Blue-chip galleries will still be there showing the big ones, if that’s who you’re after. Edward Ressle is showing Christopher Wool and Richard Prince, Allan Stone Projects will have some AbEx mainstays, and Hollis Taggart promises Calder, Motherwell, and Hofmann. Still you could be overwhelmed by the seemingly endless number of booths— and underwhelmed by the seeming lack of creativity regarding the possibilities of installing and showing artwork in the 21st century. There are other approaches to take.

Seek out the international art.
Despite the regular discussion of the new, global art world, you may be surprised at how little work by international artists makes it into American-based art publications. Think of the Dallas Art Fair as just a small attempt to rectify your global art awareness. Peep the work of emerging and mid-career artists at Canada’s Division Gallery, get to know what some of Japan’s most important contemporary artists are working with at Whitestone Gallery’s booth, or get some history in British abstract painting at the booth of London’s Hales Gallery. The same can be said for over a dozen booths from around as far away as Dubai and Cape Town and as close as Mexico City, offered by this year’s more global fair.

Find calm in the overload.
Totah, out of NYC, is showing the work of sculptor Helen Pashigan. Pashigan was a key member of California’s loosely affiliated Light and Space movement of the 1960’s and 70’s, a group of artists characterized by an interest in industrial materials and their interaction with, well, light and space. Work like Pashigan’s tends to be better served in less chaotic environs than art fair booths, but perhaps whatever Totah shows can introduce a moment of Zen into the madness of the fair’s labyrinth.

Discover overlooked forces in modernism.
At Galerie Lelong & Co you can see the work of Cuban-born, Puerto- Rican based artist Zilia Sanchez. She was active in New York during the 1960s, making minimalist sculpture alongside Carl Andre and Donald Judd. Unsurprisingly, art has paid little attention to her contributions to its history. At Lelong you can also see the work of South American heavyweights Alfredo Jaar, who was recently in Dallas for a discussion sponsored by The Nasher, and Hélio Oiticica. Petah Coyne has a presence there, too, as an artist who continues to stun with labor-intensive sculptural accumulations and the creative ways in which she exhibits them juxtaposed alongside her own photography.

If the modernist monochromes of Ellsworth Kelly seemed as though they had nowhere else to go conceptually, the work of New-York based artist Nathlie Provosty says otherwise. Several years ago at NYC’s Nathalie Karg, Provosty showed a series of monochrome paintings she activated with sound and movement as a way of considering the phenomenon of “inaudible sound:” sounds we respond to, but don’t actually realize we’re hearing. Catch Provosty’s work at Nathalie Karg’s booth.

Follow up with artists who’ve come through the region before.
The Modern Art Museum of Fort Worth’s FOCUS series is one of the best opportunities we in DFW have year-round to see the work of emerging and mid-career artists who aren’t yet household names, but are generating attention nationally and internationally.  Katherine Bernhardt’s part abstract, part figurative, and always brilliantly colored paintings humorously render the detritus of consumer culture on energetic canvases. They were on view at The Modern as part of the series. If you, like me, fell in love with them, you can catch Bernhardt’s work again at New York City-based gallery Canada during the fair’s run.

Katie Paterson is a fascinating artist. Her multimedia, research-based practice emphasizes nature and space but transforms highly detailed information— like the documentation of every solar eclipse ever seen from earth, or the locations of 27,000 dead stars— into quietly poetic installations. You may remember Paterson’s work from the Modern’s Focus series, where visitors encountered Light bulb to Stimulate Moonlight, an incandescent lightbulb which transmitted wavelengths identical to those of moonlight in a darkened gallery space. Paterson’s work will be on view at James Cohan Gallery’s booth.

Be surprised.
Finally, Dallas’ own Bivins Gallery will make its Dallas Art Fair debut this year with a multimedia, solo exhibition of the work of Mary Hull Webster, an interesting artist who has been working in digital and mixed media for over thirty years. Mystery surrounds the installation; it should be a welcome relief from endless booths of paintings with its promise of sculptural assemblages, light boxes, and sound.