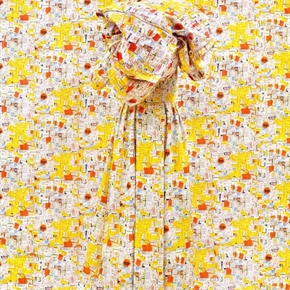 The Dallas Art Fair began inauspiciously. As co-founder Chris Byrne once said, it unfurled its sails in 2009, "three months after the world ended," referring to the Great Recession, the worst economic downturn since the Great Depression.

Ten years later, the fair is on a roll, having inspired Dallas Arts Week and now Dallas Arts Month.

The fair opens Thursday night with a lavish preview gala. Buyers and sellers by the thousands will descend on Dallas for the four-day event, which, at the moment, is enjoying what's known in the stock world as a bull-market rush.

Despite the fervor, Byrne parted ways with the fair after last year's event -- leaving his co-founder, John Sughrue, at the helm as chairman. In an interview, Byrne cited the presence of the elite, New York-based Gagosian Gallery last year as a pinnacle of achievement -- while Sughrue says the fair's strongest showings are still to come.

Together, they built an event that draws some of the most notable art dealers in the world to Dallas, a city now brimming with major and minor collectors who have eagerly followed the lead of such stalwarts as Cindy and Howard Rachofsky, Marguerite Hoffman and Deedie Rose.

Brandon Kennedy, the fair's director of exhibitor relations who is tasked with lining up the galleries, touted the expanded roster of galleries from around around the world -- places like Japan and South Africa -- and close to home, with the addition of two galleries from Dallas, one from Austin, and another three from Houston.

"I've made a really concentrated effort to widen the scope, both internationally and in terms of diversity," Kennedy said.

The Dallas Art Fair may have prospered in its recent years with an international explosion of art fairs -- a phenomenon that did not go unnoticed. In a good-natured spoof, Dallas artist Pamela Nelson zeroed in on the glut a few years back in a show at Craighead Green Gallery called "The Pink Bazaar."

Nelson said she dislikes the frenzied atmosphere of some fairs, and lamented the merchandising of art.

"It's outrageous, the people rushing around, so they can buy something before their friends do," she said.

The Dallas fair, at least, "feels a little more homegrown than some of them do," and she concedes that art fairs can and do help artists. But for some people, she said, "art becomes just another thing to have."

Nelson is not alone. José Freire, owner of New York-based Team Gallery, recently announced that he was saying goodbye to art fairs, calling them "a losing bet."

They are, he says, too heavily tilted toward the big dealers like Gagosian, which find the events "immensely rewarding." But for the smaller venues? Less and less, he says.

And while art fairs have grown worldwide in recent years, there now appears to be what Sughrue called, in financial terms, "a correction." Houston, which once hosted two art fairs, now has none. Dallas is the only city in Texas with a major art fair.

Its 10th edition comes at a time when some are saying that "Dallas is the new Austin" when it comes to artistic growth. And yet, a rising chorus of painters and sculptors say the city fails to make living here economically feasible.

In that spirit, some artists say the city caters too heavily to the high end. Sughrue said he doesn't disagree.

Sughrue agrees that Dallas "does not celebrate its own artistic community to the extent that it should. What is front and center are the shiny buildings in the Arts District and the Jackson Pollock at the DMA. We're not paying enough attention to what's happening at the core, to such terrific galleries as the one Erin Cluley owns near Trinity Groves or artist studios in Oak Cliff, where amazing work is being made.

"So, yes, there's room for improvement. Some artists in our community deserve far more attention and focus than they're getting. And I hope that we at the fair can help to change that."