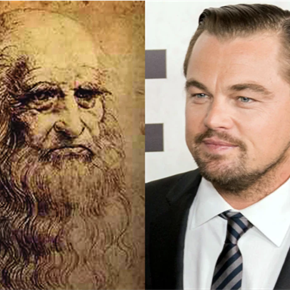 Art Industry News is a daily digest of the most consequential developments coming out of the art world and art market. Here’s what you need to know this Tuesday, February 6.

America’s First Climate Change Museum Has Opened – The Climate Museum has opened (at least temporarily) at the Parsons School of Design in New York. Its bold mission: To change the national conversation about climate change through art. The new museum’s first exhibition is by Los Angeles artist Peggy Weil. She is projecting four and a half-hour-long video of glacier ice cores onto the sidewalk of 13th Street and Fifth Avenue. (The Atlantic)

Screenwriter Chosen for Leonardo DiCaprio’s Leonardo Biopic – John Logan, who worked on the screenplay for the James Bond films Spectre and Skyfall and wrote the Tony award-winning play about Mark Rothko, Red, has been chosen to adapt Walter Isaacson’s Leonardo biography, which was optioned by Paramount and DiCaprio’s company Appian Way. DiCaprio will play Leonardo. (Hollywood Reporter)

Artists Are Fleeing San Francisco – San Francisco’s local government has launched an online survey to measure how many artists have left the city due to rising rents and cost of living. Rents have increased a reported 70 percent between 2010 and 2016. The former art critic for the San Francisco Chronicle predicts the results of the latest survey will be “shocking.” (The Art Newspaper)

Sotheby’s Battles Dealer Over Haring Nonpayment – There will be a hearing today to determine what exactly happened when the collector Anatole Shagalov didn’t pay the winning $6.5 million bid on Keith Haring’s untitled 1982 work that was sold at Sotheby’s last May. Shagalov claims the auction house agreed he could pay in installments, but Sotheby’s refutes that claim. The non-sale set a record price for the artist—and created a false market narrative. (Bloomberg)

Dallas Art Fair Releases Exhibitor List – For its 10th anniversary edition this year, the Dallas fair will see the addition of almost 30 new galleries to its roster of 100 participants from over 30 different cities. New arrivals include Casey Kaplan, The Hole, Luhring Augustine, and James Cohan from New York. The fair will run from April 12 through 15. (Press release)

Former Zwirner Partner Launches New Gallery – Tribeca is getting a new gallery. An ex-partner at David Zwirner, Ales Ortuzar, is opening Ortuzar Projects at 9 White Street this month. Its inaugural exhibition opens February 16 with the first US solo show of Michel Parmentier, the Paris-born painter who was part of the historic BMPT gang. (ARTnews)

New Director for Noguchi Museum – Brett Littman, the director of the Drawing Center in New York, will head to Queens to lead the Isamu Noguchi Foundation and Garden Museum. He suceeds Jenny Dixon, who retired from the position after nearly 15 years in December. Littman begins his new role on May 1. (Press release)

Vilcek Foundation Awards Architect $100,000 Prize – Teddy Cruz, the director of design at Estudio Teddy Cruz + Fonna Forman and a professor at UC San Diego, has won the $100,000 award for architecture from the Vilcek Foundation, which celebrates immigrant contributions to the arts and sciences in the US. Cruz was born in Guatemala and emigrated to California when he was 20. (Artforum)

Stonehenge Threatened by New Tunnel – Plans to ease congestion by building a tunnel and a flyover past Stonehenge could threaten a nearby excavation site where archaeologists have uncovered ritualistically preserved 6,000-year-old wild cattle prints. The auroch prints could have been preserved as part of a neolithic “cattle cult” and mark an important discovery about Britain’s history. (The Guardian)

Paris Welcomes a New Wave of Exiles – Since October, a drop-in center located in a working class area of northern Paris has been helping around 200 artists who have been exiled from their home countries rebuild their careers. Last week, the French culture minister Françoise Nyssen publicly welcomed artists from The Studio of Artists in Exile to her offices and invited 15 to show their work in her ministry. (Arab News)

Are There Hidden Rooms in King Tut’s Tomb? – In Egypt, archaeologists are using ground penetrating radar to scan for possible hidden chambers in King Tutankhamun’s tomb, hoping to stumble upon Queen Nefertiti’s secret resting place after a previously unknown door was uncovered a few years ago. (Daily Mail)

Herzog & de Meuron Will Design Berlin’s Modern Art Museum – It’s official—the Swiss architects are designing Berlin’s €200 million ($247 million) museum of Modern art. Now that the deal has been confirmed, the long-delayed project could be ready by 2023. But the architects’ early barn-like designs have had a mixed reception in Berlin. (Monopol)