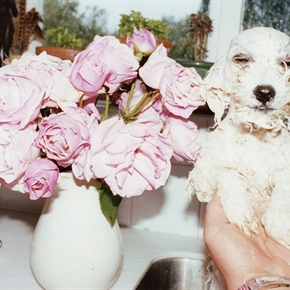 The dust has settled and the figures are in, and Texas’ Super Bowl of Art, the Dallas Art Fair, has successfully wrapped year nine. Record attendance — 14,500 art aficionados including some of Artnews Top 200 Collectors in the World, a bounty of sales, a few gallery titans, impressive international dealers, and hometown exhibitors that did Dallas proud — all made the weekend and its buildup as exciting as the Big Game for the art set.

A rising tide lifts all boats, and so it was when this year’s Fair unfurled at Fashion Industry Gallery, in the heart of the Dallas Arts District, literally footsteps from the Dallas Museum of Art, and a concise stroll to two other institutions, the celebrated Nasher Sculpture Center and under-known jewel-box Crow Collection of Asian Art.

Every year the Dallas Art Fair ratchets up a level, so 2017 was among this scribe’s faves, although more hours were needed to navigate the close looking required from among the almost 100 gallerists.

Favorite booth? I personally admit to a bias to Pop, so we left our heart in Allan Stone Projects, guiltily lusting after a $425K slice of lemon meringue pie — a drawing by the great West Coast master of sweet foodstuffs as well as street scenes, Wayne Thiebaud, who, with the passing of James Rosenquist is arguably the last living first- generation Pop artist. While the Thiebaud is still awaiting a new home, an out of town buyer waltzed in and snapped up a Franz Kline Ab Ex painting from 1958 to the tune of $375,000. Allan Stone also presented a nice cache of Cornell boxes, displayed with nuance in a chamber/viewing room at the back of the booth.

What else stood out:

Lehmann Maupin Gallery, another first time exhibitor at the Fair, was the powerhouse, selling out the entire contents of a booth replete with heavy-hitters such as Tracey Emin, Juergen Teller, and Catherine Opie.

Gagosian Gallery gave it up to Piero Golia, who took over its space with a conceptual project extending his Chalet Dallas iteration at the Nasher in 2015-2016. The booth, placed at the epicenter of the Fair entrance, was manned by Golia’s pals including video artist and former CentralTrak resident Maneesh Raj Madahar, in from Los Angeles.

A KAWS lot set for the block drew our eye at the Heritage Auctions‘ spot in the Fine Art Services Lounge. Four feet tall, fabricated out of painted cast vinyl, it was odd, startling, and surreal — part mad toy, resembling some strange doppelganger.

Also riveting was an Alex Katz portrait, at Galería Javier López & Fer Francés. In from Madrid, the dealer also filled one wall with a bank of the painter’s rarely seen large-scale drawings, making for a nice dialogue about process, and allowing the viewer to see the power and surety of Katz’s hand.

We stopped by L.A.-based Hannah Hoffman Gallery, manned by the daughter of the celebrated Dallas collecting couple Marguerite Hoffman and the late Robert Hoffman. The reward? Discovering the alchemical creations of Elaine Cameron-Weir, a Canadian-born creative receiving attention now thanks to her upcoming show at New York’s New Museum. Cameron-Weir’s desk, a functional sculpture where Hoffman conducted business during the Fair, bore traces of the occult, provided by the slow burn of mystical frankincense.

Co-owner Missy Finger tells PaperCity “The attendance was far superior to the older fair, and the exhibiting galleries more interesting.” Finger reported interest and strong sales for a thoughtfully curated selected that reflected canonical images such as works by Robert Frank, Luis Gonzalez Palma, and Andre Kertesz, as well as Texas lensmen Earlie Hudnall Jr. (whose Hip Hop image is on hold at a Texas museum), and Jeanine Michna-Bales‘ new nocturnal series documenting stops along the Underground Railroad.

As to other walls, recommended:

Howard Sherman‘s dizzying painting at Circuit12 Contemporary, is a very good exhibition that sees the artist at the top of his game (through Mary 6). Working in Houston, New York, and Marfa has been inspiring for Sherman. Collectors flocked too and responded — two canvases were sold for $14,000 each — underscoring that this Fair is good business also for dealers of quality who are on the scene but not (yet) exhibitors. Circuit12 owner/director Dustin Orlando confided he hopes to exhibit in 2018.

Finally, Fair co-founder Chris Byrne chatted with PaperCity about the phenomenal growth of Dallas Art Fair, which has almost usurped March’s Armory Show week in buzz and acclaim, complemented by a banquet of side events, openings, and parties to add to the esprit and experience of Fair goers and exhibitors: “For the past several years, Kelly Cornell (the Fair’s Director) and I have worked to develop the calendar during the week. One of the nicest things has become the range of programming — the scheduling is linear, so that it was possible for our audience and visiting gallerists to attend almost all of the events.”

Byrne continues,”We’ve also tried to establish a fair that brings together a number of top national and international dealers with our local galleries. The exhibitors who participated during past years recommended other galleries and that’s been beneficial to the fair’s growth.”

He then confided, “There’s never been a master plan. DAF was able to generate an organic life of its own with hopefully a visual coherence and cohesion.”

And one thing that the Fair is known for — its democratic approach — is its strong point, and unique to DAF. Byrne elaborates, “The hope was that by presenting the local, national, and international galleries on an even playing field the individual viewer has a substantial role in evaluating the art on its own terms and to my mind, the 2017 Dallas Art Fair became kind of a wonderful union — is there another fair out there that includes Simon Lee Galleryalongside our own local Ro2 Art?”

Meanwhile the city continues its chock-a-block Dallas Arts Month, distinguished by a blockbuster Mexico show at the Dallas Museum of Art (through July 16), a bounty of Richard Serra prints at the Nasher Sculpture Center (hurry, closes April 30), and the Meadows Museum‘s plunge into Spanish history vis-à-vis 17th-century master Jusepe de Ribera‘s rare and haunting trove of drawings (though June 11). Also contemporary collectors will want to catch The Power Station‘s posthumous survey for the late nihilist Steven Parrino, in tune with these uncertain times (through June 16).

And news that Byrne reconfirmed: 2018 will be the last year of the Dallas Art Fair at Fashion Industry Gallery. Come 2019, and the start of its second decade, the Fair jumps to a warehouse building in the heart of the booming Design District. The new locale is owned by co-founder John Sughrue, so expect the same level of concierge service, polish, and convivial attention to detail. Stay tuned.