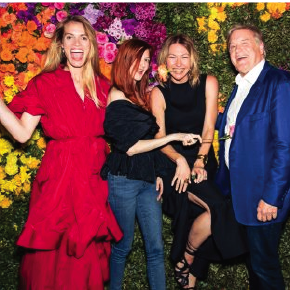 As the sun was about to set on the Dallas Art Fair, revelers cranked up the party action for a send off of the ninth annual fair that would keep fans buzzing for weeks. With a nod to Dia de los Muertos, the fourth annual Eye Ball at The Joule, embraced “Aye, eye, Aye!” as its theme and a festival of fun ensued.

At the center of the Mexican­flavored bash was Tony Tasset’s 30­-foot Eye sculpture. And the things it witnessed! Consider the 15­-foot tall, festively­-attired skeleton that pranced through the outdoor scene, the photo­-op flower wall featuring a “hidden” floral­-decked senorita, the Jan Strimple models in Dia de los Muertos face paint, and a 10­-seat swing set adorned with colorful, flowing streamers. Flowers and flower petals were everywhere in the colorful tableau.

Headington Companies and The Joule once again hosted the outdoor evening that rocked not only with the sights, the food and the fun but also with the sounds of Austin­based talent Yayo Sanchez. While Sanchez had the spotlight on stage, hometown talent Leon Bridges was spotted carousing on the swing set.