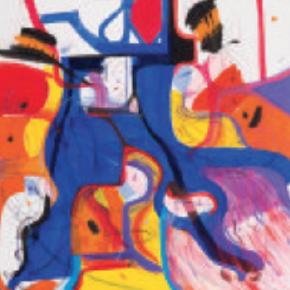 Initially operating as a project space in Oak Park—a village on the West Side of Chicago where Frank Lloyd Wright once lived—Julie and Shane Campbell began by showing art in their family home. Primarily exhibiting the work of contemporary American artists, Shane Campbell Gallery opened its frst Chicago storefront art space in September 2006. Six years later they added a new location in a Mies van der Rohe apartment in Lincoln Park, expanding exhibition options for gallery artists by once more offering a domestic space for the presentation of art while serving as a guest house for visiting artists and collectors. In July 2015, the gallery moved its primary exhibition space to an 8,550-square-foot, bowstring-truss building in Chicago’s South Loop, renovated by Urban Lab that quadrupled the exhibition space for its artist roster.

James Cope: What was the impetus for starting your own gallery?

Shane Campbell: My wife and I hatched the plan to open a gallery shortly after meeting in college. Once we resettled in Chicago after grad school, we showed work in our home in an effort to bring art we deemed interesting from outside Chicago. This project slowly grew into a commercial gallery in 2006 and is now located in the South Loop of Chicago. We continue to focus on exhibiting the work we want to see by artists who have an enduring effect on our lives.

JC: As New York City is commonly considered the center of the “art world,” what advice can you offer gallerists or artists trying to operate in other cities?

SC: Galleries and artists can continue to defne themselves as not New York or they can create their own reality. Many of us get into art because of the supposed freedom it offers, but we quickly get in line whenever a hierarchy presents itself, so my advice is to follow your bliss and be vigilant in your convictions.

JC: You are showing Michelle Rawlings, a Dallas-based artist who recently had a solo show at ANDNOW. What drew you to Michelle’s work?

SC: I frst saw Michelle’s paintings in person in Raster Gallery’s booth at NADA Miami in 2015. Their compressed size and saturated color absorbed me into her world, crafted from waypoints navigating the drift of everyday life.

JC: How do art fairs help a gallery and its artists?

SC: Art fairs are the social nodes of the art world that enable us to binge on culture and dish on the social machinations of the art world until we come together again at the next venue. They are critical for galleries and artists alike in accruing cultural capital within a compressed period of time.

JC: What will you be showing at the Dallas Art Fair?

SC: We will be showing new work by Lisa Williamson, Kim Fisher, William J. O’Brien, Mimi Lauter, Alma Allen, and Joanne Greenbaum. JC: What do you look forward to most about visiting Dallas? SC: The brisket at Lockhart Smokehouse.