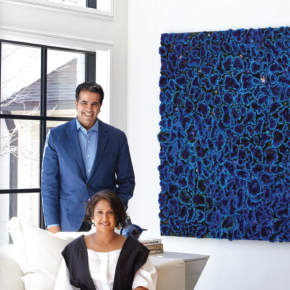 Each April, the Dallas Art Fair transforms the cultural landscape in North Texas when galleries from around the world join local stalwarts, bringing area audiences a cornucopia of exceptional contemporary art. This annual spring migration to Dallas, now in its 9th iteration, has also generated a new group of collectors energized by what they are seeing. Patron checked in with a few of them about their prior Dallas Art Fair acquisitions and invited them to share notes on available works of interest from the 2017 exhibitors.

Molly Bruder has contemporary art encoded in her DNA. She is the daughter of Becky Bruder, a former art advisor and one-time business partner with Dallas Art Fair co-founder Chris Byrne. Over the past 10 years, she has come to appreciate the regular visits to museums and galleries she made as a child in the company of her mother. The early exposure paid off for Molly and her sister Anne, who followed in her mother’s art-enthused footsteps. Anne currently resides in New York, where she works for Worth Art Advisory.

Newly engaged, Bruder says that she and her fiancé enjoy acquiring work by younger artists. She credits her sister with bringing her to art fairs in Miami and Basel, as well to the local event. At last year’s Dallas Art Fair, they bought Margaux (Maggie) Ogden’s Mass Sext from Johannes Vogt Gallery of New York. “We were drawn to the whimsicality of it, and we just had a visceral reaction to it,” she says.

This year’s fair will be especially meaningful for Bruder. “We want to treat ourselves to a piece of art together. We are excited to buy our first piece as a soon-to-be-married couple,” she says. There are several galleries they look forward to visiting at the fair, including CANADA Gallery from New York. Bruder is specifically interested in Katherine Bernhardt’s painting, KB2016-135. She says, “I love all of Katherine’s work. We purchased two of her pieces at the Dallas Art Fair last year, and I have continued to follow her ever since. Her work is playful and refreshing to the eye.”

The couple is also eyeing two paintings from other New York galleries. These include Sarah Dwyer’s Cattywampus from Jane Lombard Gallery and Austin Eddy’s AE016 from Taymour Grahne Gallery. Bruder says, “Sarah Dwyer is one of my favorite abstract painters working today. I love her use of color and surfaces, and Cattywampus is particularly reflective of that. She has a lot of energy and movement in her paintings, which I am always attracted to.” Regarding Eddy’s work, Bruder says, “I admire his use of outsider artist language to create an abstract painting. I am drawn to his bold shapes and colors, and he has a distinct style.”

Bruder is also looking forward to visiting Jessica Silverman Gallery to see TP2 Eastbound by Hugh Scott-Douglas. “I am intrigued by the medium he uses to print trade routes onto his canvas,” she says of his work, which is comprised of a UV-cured inkjet print and digitally printed polyester resin on canvas.

As part of this year’s fair, the Bruder sisters and several cousins are hosting a private cocktail reception for young art patrons and collectors. As she explains it, “My sister, my cousins, and I grew up around art, and we would love to share that enthusiasm with others. The Dallas Art Fair is a wonderful starting point for looking at art. The best thing about it is its intimate size, as compared to other art fairs, which provides a wonderful opportunity to meet these great gallerists.”

“Early on we started making the Dallas Art Fair a hooky day on Friday,” says Gowri Sharma. She and her husband, Alex, have an eclectic collection that began with traditional Indian work. At this point, it spans continents, artists, and media, many discovered at the fair. And the process of learning about new work is as exhilarating as its discovery. They are also excited to see new work each year, especially with the continuing influx of galleries from abroad.

The Sharmas are careful collectors. “We often start with a small piece by an artist and live with it. Then we think, ‘Oh, if we can just get a big one,’” Gowri says. In some cases, the big one still manages to make it home with them. Such is the case with the work by Nabil Nahas that they purchased at last year’s art fair from the Dubai-based gallery, Lawrie Shabibi. “We both fell in love with this,” Gowri says. “It’s a piece of art that takes you to a different place,” she says of the work. Its provenance is equally exciting. “Contemporary Middle Eastern art is so new. It’s so ground floor,” says Alex.

In previewing available work, Gowri says, “I wanted to show the range and variety available.” There are six works in particular that the Sharmas are drawn to. Among them is Pietro Ruffo’s Migrazioni 6 (Asia) from Galerie Italienne Paris. Of this work, Gowri says, “I like the detail of the drawing inside, the curious butterfly-like shape, and the variety of materials used. After looking at it for some time, it occurred to me that the shape of the splayed part is that of a globe, with the meridian lines creating the grid. I initially thought this was a small piece until I read that it was over 91 inches long.”

Another work, Triple Oscillation by James Clar, represented by Jane Lombard Gallery, also appeals to Gowri, who says, “It is static and dynamic at the same time. The interplay of the color choices and positions add another layer of dimension to it.”

Tim Van Laere Gallery, from Antwerp, is featuring two other works that attract the Sharmas: Little Voices by Peter Rogiers and The Lonely Boat by Ben Sledsens. “There is something theatrical about the poses of each figure and their relationship to each other. The juxtaposition of the rough human/animal-like figures to the smooth and elegant Corten steel base makes for a very interesting complete sculpture,“ says Gowri. Of The Lonely Boat, she says, “This beautiful moody piece seems familiar since it has elements in it that reference some of the great modern artists.”

Lundgren Gallery in Palma is bringing Rannva Kunoy’s History. Gowri says, “I love the ethereal quality of this painting due to the way the paint has been applied and worked on. The color reminds me of an old x-ray.” Alex adds, “Her painting seems to contain so much. It could be a very interesting exercise trying to peel back the layers and figure out the metaphor and allegory contained within.”

The Sharmas have attended art fairs all over the world, but are most impressed with this one. “There is a camaraderie in Dallas. It’s a testament to what Chris (Byrne) and John (Sughrue) have done,” they conclude.

Beginning with their first wedding anniversary, Laura and Michael Doak have been buying art together rather than exchanging gifts. This year marks their eighth anniversary. But their collection reflects more than anniversary gifts. Inspired by Picasso’s quote, “Art washes from the soul the dust of everyday life,” the couple enjoys spending time visiting galleries and auction houses. Dallas Art Fair, they say, also provides “a very efficient means of seeing lots of art and galleries.”

Having recently returned to this area after several years of living on the East Coast and abroad, last year was the couple’s first year to attend the Dallas Art Fair. They went with their friends Bill Carr and Michael Pappas, whose encouragement was infectious. It was there that Laura saw Line of Reason by Yamini Nayar in the booth of San Francisco-based Gallery, Wendi Norris. One of its interesting aspects is its process. “She builds a diorama using found objects. You can see some things that are familiar but very abstract. She takes an aerial photo of the diorama. She then destroys the original diorama and rebuilds it,” Laura explains. The new rendering, which she then photographs again, creates a new, dimensional abstract work. “I think this is the most interesting, thoughtful work we have bought,” Michael adds.

Commenting on work at this year’s fair, Laura says, “One work that stood out will be on display at Tim Van Laere Gallery. It is a charcoal work called Robert Always Resisted Giving Any Kind of Explanation, by Rinus Van de Velde.” They are also fans of Ronchini Gallery, where Michael looks forward to seeing the work of Gianpietro Carlesso. He says, “Carlesso’s Curvature series contemplates infinity, and this piece in marble looks stunning. Sculpture is even tougher than two-dimensional artworks to assess  through an image, so we can’t wait to see it in person.” Laura looks forward to seeing the work of Paolo Serra, also at Ronchini.

From Taubert Contemporary, the couple looks forward to Methadone by Beate Geissler and Oliver Sann. “Methadone provides immediate visual interest—bright, cherry red, viscous, and beautiful. But beneath this interesting image, one confronts its darker title, which is timely with the epidemic of opioid addiction in our country. And as we understand it, the artists—who are a couple—created the piece in reflection of our dependence on oil and fossil fuels,” they say.

“Among more established artists, we will take a look at Ellsworth Kelly’s Color Square 2 at Talley Dunn Gallery and Tracy Emin’s Its different when you Are in Love at Lehmann Maupin. In the case of Kelly, it is a typically minimalist, five-color lithograph. In the 1990’s era of Young British Artists and Charles Saatchi’s collection, Emin was one of the first young artists we became aware of. These days, she is part of the firmament, and this neon piece is characteristically confessional and intimate,” Michael explains.

For the Doaks, the thrill of discovering and acquiring new work is just the first step. Part of the pleasure they derive is in rotating their collection, allowing them to create new experiences in different environments. From there, Michael says, “We are always thinking about what to discover and learn about next.”

In speaking with these collectors, they appreciate the top-flight exhibitors and breadth of strong work at Dallas Art Fair, noting its tremendous benefit to the city. They also emphasized the importance of local institutions—Dallas Contemporary, Dallas Museum of Art, and Nasher Sculpture Center—all beneficiaries of Dallas Art Fair and organizations vital to the cultural life in the area.