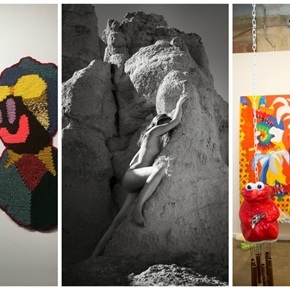 Having spent a lot of time in mid-size American cities as of late, I posit the question: is there a corner of our United States where artists aren't fostering vibrant, exciting communities and doing vital, challenging work? Deep in the heart of Texas, at the Dallas Art Fair, that city's creative class was on resplendent display for members of the arts industry flown in from places as predictable as New York and Paris, and as unexpected as Puerto Rico, Dubai, and Guadalajara.

The 2017 fair had the tastefully-assembled panache of The Armory Show or Art Basel, with works by Juergen Teller and Catherine Opie among the heavy-hitters. But it was the fair's relatively small size, the presence and openness of artists, and supplementary studio visits and fetes thrown by local institutions that fostered an intimate, convivial vibe. The by-no-means exhaustive list below highlights artists from all over, but the Dallas scene deserves some extra shine: Arthur Peña's kaleidoscopic paintings mine the artist's emotional landscape. Michelle Rawlings excavates memory and identity through painted, collaged, sculptural works. Studio-mates and frequent collaborators Jeff Gibbons, Jesse Morgan Barnett, and Greg Ruppe dream up esoteric, gritty, musical artworks that defy categorization and even documentation. (One of their projects last year involved inviting the Dallas arts community to a mysterious, one-off game of laser tag.)

Dallas is establishing itself as a hotbed for art, turning what most people think about the city—oil money, Lee Harvey Oswald, the Cowboys—on its head. The Dallas Art Fair is at the forefront of spreading the word in that regard, and these were a few of our favorite works on view:

Few works on display were as viscerally arresting as Nina Chanel Abney's diptych of bold paintings confronting race and power in America. For her senior thesis show at Parsons in 2007, the artist painted herself as a white, gun-toting prison guard and her classmates, who are all white, as black inmates wearing orange jumpsuits, commenting on both the lack of diversity in academia as well as the overwhelmingly African-American prison population in the US. Her subsequent work is equally vital and searing.

I'll be honest: I didn't expect Garfield and Elmo wind chimes to be this dynamic, but Detroit-based artist Jonathan Rajewski's playful mobiles fixed me in their googly muppet eyes and handily dispatched my assumptions. The artist was showing work in the booth of newly-minted Michigan gallery Reyes Projects, whose debut exhibition Undercover Boss opens April 21.

Born in Memphis, TN to parents of Ghanian heritage, Derek Fordjour was one of the artists selected by the Dallas Art Fair Foundation Acquisition Program, which chooses a handful of works from the fair each year to join the Dallas Art Museum's permanent collection. His nuanced, textural paintings and sculptures are literally multilayered; words on yellowed pages peek out beneath the paint. He's an artist of unique perspective, and certainly one to watch.

This work stopped me in my tracks and made me WOL—"Woah" out loud. What looks like a blank white screen, on further inspection, reveals itself to be a coded video message discernible only when viewed in reflection upside down.

Caroline Wells Chandler's crocheted cowboys and other motifs of the American West were sprinkled throughout this San Juan-based gallery's booth. The characters' goofy, 8-bit grins and technicolor skin belie the work's progressive take on the classic cowboys-and-indians motif. They present a sex-positive, intersectional version of themes heretofore whitewashed by the patriarchy.

The Brussels-based gallery's entire booth was dedicated to the work of Jakub Nepras, a Czech multimedia artist whose video collages projected on unexpected surfaces, like painted drywall and plexiglass embedded with stones, dissect commerce, human interactions, and the flow of energy.

7. Maryam Eisler's Eurydice in Provence and Searching for Eve in the American West

Maryam Eisler's black-and-white photographs of nudes in arid landscapes are damn sexy. The contrast of smooth flesh and coarse stone is reminiscent of Bernini's textural masterpiece, Daphne and Apollo. Born in Iran but now based in London, Eisler's striking compositions are inspired by mythology and its application to reality. With two series on view in Dallas, the photographer imbued the proceedings with a welcome dose of divine feminine energy.

First off, Travesia Cuatro, a gallery with outposts in both Madrid and Guadalajara, wins for exuding chic minimalist vibes the entire fair. Their carefully considered selections highlighted four Mexican artists with work exploring themes of physics, literature, and psychology. Jorge Méndez Blake's Dearest Max, My Last Request is a meditation on Kafka's dying wish for all his unpublished manuscripts to be burned. (That request was ignored.) And in Jose Dávila's Joint E ort, a concrete block balances at a precarious angle, tethered by a stone and precise geometry.

Another Dallas Art Fair acquisition, Summer Wheat's Bread Winners is an accomplishment of experimental figurative painting. The Oklahoma artist's unconventional aesthetic, achieved by pushing layers of acrylic paint through a mesh screen, appears fiber-like, almost like a carpet or tapestry.