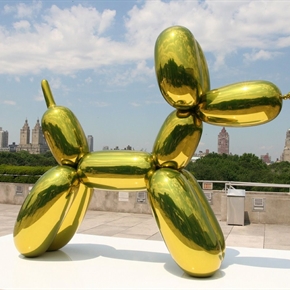 Amid the galas, the private collection visits, the openings, and the bustling Dallas Art Fair, art enthusiasts paused for an hour last week to step back and consider what the evolution of the art market means for artists themselves.

“New Pitches: Reframing Artists for a Changing Market” was a wide-ranging panel discussion held at the Nasher Sculpture Center. Four experienced observers of the art market discussed the role of branding, controversy, galleries, and the media in shaping the art world, and how artists and galleries can survive and thrive. The panelists were Charlotte Burns, editor of Art Agency, Partners; Sara Fitzmaurice, founder of arts and culture public relations firm Fitz & Co.; and Doug Woodham, former president of the Americas for Christie’s and author of the recently published book Art Collecting Today; and the talk was moderated by Jori Finkel, an arts journalist and former editor of Art+Auction magazine. Here are five takeaways from the talk.

Artists are brands now. Deal with it.

Thanks to—no surprises here—social media, the internet, and the influx of money into the market, artists are transparently marketing themselves as brands, “with no apologies,” said Fitzmaurice, “just like corporate brands.” Those brand names tend to rise to the top, thanks to both the structure of the market (in which ultra-wealthy collectors compete for a handful of trophy artists) and the media landscape.

The proliferation of information heightens the value of brand names and controversy.

Plummeting costs of production and distribution has led to a tsunami of content, both online and printed, lowering the ratio of signal to noise. “A monograph used to mean something,” said Woodham, unlike today, when a gallery can hire a writer inexpensively and put out a book on the cheap. That dynamic further lifts the value of brand-name artists, given their ability to grab readers’ attention, Burns said. She cited coverage of group shows that skips over the more interesting work in favor of highlighting the show’s more recognizable artists.

The panelists also acknowledged that controversy, such as the debate surrounding the Dana Schutz painting at the Whitney Biennial, is a necessary evil. It’s also nothing new, Woodham said, recounting stories of how Amedeo Modigliani courted controversy by displaying his paintings of nudes across from a Paris police station.

The appetite for and awareness of art is higher than ever.

Woodham proposed that we’re currently living in the best era in which to be an artist, given the level of awareness and appetite for art. That’s true even outside of the relatively small subset of artists who make more than $1 million a year, who, he estimates, number between 300 and 500.

He points to the vanishingly small acceptance rate for Yale and Columbia MFA programs, which he said is lower than that of Harvard University undergrads (5.4%), as another sign that would-be artists see opportunity in the market. “We should take pleasure in the fact that people want art in their homes and in their lives,” Woodham said. Fitzmaurice said Doug Aitken recently told her that as a young artist, living on the cheap, he never imagined someone would want to buy his art—a line that drew knowing laughs from the audience.

But maybe not the best time to own a gallery.

One consequence of the rising celebrity status of artists is their increased negotiating power with respect to their galleries. This could allow artists to demand a larger share of sales than the traditional 50/50 split. In addition, galleries bear the cost of attending fairs, and often fronting artworks’ production costs and other expenses.

The panelists anticipated that the trend of “megadealers” or “über galleries,” would continue, with big-name galleries absorbing many of the most talented or marketable artists while mid-tier galleries suffer. Woodham suggested that smaller and medium-sized galleries could survive if they stopped trying to chase the same ultra-high-net-worth individuals buying the most expensive works, and instead focus on middle-tier collectors who may buy a few things a year in the four or five figure range. He estimated there were fewer than 100,000 people in the world who can regularly purchase works of $500,000 or above, and smaller galleries were wasting their time by “marketing to whales.”

Instead, he counseled that galleries should be more open and welcoming spaces by, for example, writing clearer, more accessible texts to accompany artists’ work and helping people understand pricing. He even suggested that galleries should facilitate Skype calls with artists, who he said are usually the best-equipped people to explain the work. “Most gallery press releases are still too turgid, with lots of 25-cent words,” he said. “It’s so off-putting.”

Woodham cited examples of artists working outside the gallery system, like CJ Hendry, who started out showing her meticulous drawings on Instagram and now regularly collaborates with galleries and brands. He also pointed to the many artists selling works through the SaatchiArt.com website.

Burns noted that it’s not just the middle tier of gallerists looking to do something different, but also people reaching middle age. She cited the example of dealer Joel Mesler, who decided to close the New York outpost he ran with Zach Feuer and work exclusively out of his Rental Gallery in the Hamptons, figuring that he’d have “three dead months in the city or six dead months on the beach.”

Fitzmaurice suggested galleries could try using proven sales models from other industries or players in the art market, seeking to understand, for example, how auction houses or luxury sites like Net-a-Porter cultivate and retain clients. Fortunately, people in the art world are a creative and resourceful bunch.