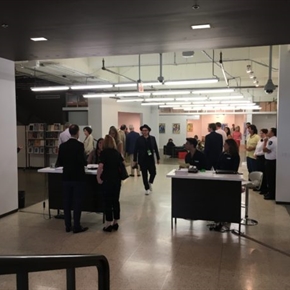 Last year there was a dip in the energy level of the Dallas Art Fair week, and I wondered if it had topped out two years ago in 2015 and the hype would recede permanently. But this year, the fair’s ninth, the city was back to full throttle. The fair itself looked better this year—maybe the best it’s ever looked—and it felt like there were more overlapping scenes across town, and the people (local and visiting) knew where to be at any given time.

As usual with DAF week, local artists and spaces took full advantage of the publicity and the crowds, and staged events and shows that we Dallasites may take for granted for much of the rest of the year. But I think through the eyes of out-of-towners, the local art scene, or scenes, look chill and informal and capable. It’s a good look. When the hacked emergency sirens went off across the city late Friday night and we were all still out, I was thinking: We’re good; we can drop the mic on this apocalypse.

But right now I’d like to focus on the fair itself. My sense is that sales were happening (despite the self-reporting of exhibitors being unreliable) and/or galleries now know to adjust their expectations for this particular fair. Even by late Saturday afternoon dealers did not have that thousand-yard stare of bad-fair trauma. People were engaged nearly everywhere I looked. My artist friends on social media were reporting (I think reliably) the sales of their work at the fair, and if this means the Dallas collector base is catching up to Houston in terms of supporting its own scene at the mid-tier range, then it’s about time.

Galleries from out of town have to play a long game here, because that’s the rule for having an exotic presence take root at an annual regional fair. Name recognition helps. (Though Gagosian, in its first year here with a booth near the entrance, didn’t even bother to put up a sign. This was neither cool nor not-cool.) I’ve said this a lot but it bears repeating: the DMA’s acquisition fund, which allows the museum to drop considerable cash at the fair, is clever, and it benefits all of us because it guarantees the visiting galleries bring the better stuff. This is the second year of the fund and it’s already doubled to $100K, and just because the DMA goes in with a short list of possibilities doesn’t mean it sticks to it. It doesn’t. The playing field for the galleries in this contest is remarkably level. I felt like in earlier years the higher-profile galleries coming in from New York and London, etc., were bringing some bottom-of-the-barrel scraps for all of the presumably dumb and indiscriminate Dallas eyes. Those days are over. So thank you, Gavin Delahunty and the DMA.

With that, I doubt even the most ambitious galleries are bringing art priced in the six digits, and my guess is most regional buyers observe a spending ceiling in the $10K-$20K range (I’d love to see proof to the contrary). There could be (theoretically) exceptions: while the DMA bought seven pieces with its budget, it might’ve blown its load on one thing, like an excellent early John McLaughlin painting that somehow isn’t in the current (stunning) retrospective at LACMA. Next time, maybe.

Some observations: It was good to see Anthony Meier’s San Francisco gallery back at the fair after a multi-year absence. In the first years of the fair, I had begun to think of him as an honorary Dallasite with excellent local connections, and then he was MIA, and that felt to me like a harbinger of DAF doom. But this year he was set up across the way from Talley Dunn’s space upstairs, and his booth featured some familiar favorites like Tony Feher, Jim Hodges, and Donald Moffett. Dunn did something really different this year and showed only primary market work that, though vintage, hasn’t been made available until now: drawings, one-offs, and rare editions by Stella, Johns, Holzer, Close, Serra, and a really great Luis Jiménez.

Most returning galleries set up in the same spot each year (generally a good move), but Valley House, which was always in the back, this year had a big primo spot upstairs and seemed to be doing some stonking hard business in Sedrick Huckaby, David Dreyer, Valton Tyler, and a newbie named Miles Cleveland Goodwin.

Some galleries teamed up this year for a booth—a slight trend at international fairs, too—with the groovy Cherry and Martin out of LA pairing with Galerie Frank Elbaz of Paris (and Dallas of late). James Cope’s Dallas-based And Now teamed with London’s Workplace Gallery and it looked good. The standout there I thought were the paintings by Laura Lancaster. Some unexpectedly cool galleries made the show, too. Night Gallery out of LA was lodged in a back booth but hosted a good crowd, and Simon Lee out of London was showing some new Angela Bulloch.

The dealers were on point all weekend. I could scarcely poke my head around a wall without some great-looking young gallerist from Mexico City or Antwerp calling me in for an introduction to the work. In this weird and shaky post-election climate, the determination to get the work moving is palpable. It’s an art fair—that hell’s lobby of slippery commerce meeting art—but I was rooting for them all. When I spotted brand-new sculptures by Tony Matelli I kind of flipped out, and the sales guy at Marlborough was as charming as all get-out about it, and I left thinking: Am I really in Dallas?

I’m happy to report that the DFW galleries, some of them mentioned above, have this down cold. What’s cool is that they feel more adventurous, playful and confident than ever before, which is probably a case of having less to lose as well as a clear home-field advantage. Barry Whistler’s booth was relaxed (what else would he be?), Ro2 continues to kill with sheer charm density, William Campbell fronted its space with some big, gorgeous Otis Jones paintings, Conduit evidently sold the crap out of some Jeff Gibbons. I have that info because I also bought one. If I have to tell myself that spending money on art right now is the way to fight the good fight, so be it.