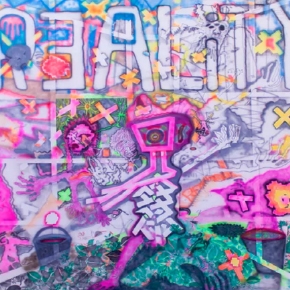 Some of the Coolest, Grooviest Artwork Being Shown at the Dallas Art Fair Comes From Right Here - April 9, 2017

It's closing time at the Dallas Art Fair. This year, the fair lured almost 100 galleries from all over the world, including at least one (New York-based Gagosian Gallery) that ranks as a major heavyweight.

No fewer than 39 came from 16 other countries, which enhances the fair's increasingly lofty international profile.

"Think globally, act locally" has its own meaning at the fair, where North Texas has fielded an impressive home team, giving area residents the opportunity to check out some of the finest work being shown by local galleries. Dallas venues with booths at the fair include And Now, Barry Whistler Gallery, Conduit Gallery, Cris Worley Fine Arts, Erin Cluley Gallery, Photographs Do Not Bend (PDNB Gallery), Ro2 Art, Talley Dunn Gallery and Valley House Gallery & Sculpture Garden.

The lone Fort Worth entry is William Campbell Contemporary Art.

You can go to Fashion Industry Gallery on Ross Avenue until 6 p.m. today to check out the exhibitors, including the Barry Whistler space, which is showing the work of Andrea Rosenberg, John Pomara and Jay Shinn, whom we wrote about recently for the art he's placing in Texas airports.

The fair is one thing, the gallery's own elaborate venues quite another. Most of those have plenty going on in April, which aside from being the opening of baseball season has to be the hot season for galleries.

The mention of Maya Lin alone is extraordinary. She is a 57-year-old artist who rose to fame at 21 for being named the designer of the Vietnam Veterans Memorial in Washington. I can't think of any public monument as memorable as the Vietnam Veterans Memorial, which contains the names of more than 58,000 fallen soldiers. Talley Dunn says the show revels in three-dimensional works that carry "a very strong presence." For this show, Lin offers a piece based upon "the mapping of a lake in Illinois, Fox Lake. It is an aerial view of the lake. There is this great play of color and light and reflection similar to the reflection of the water."

You can visit Cris Worley Fine Arts at the fair, then go to its space on Levee Street in the Design District and see the new exhibition by Simeen Farhat, "Blood Shot Is Blood Loved," which continues through May 6.

The same goes for the Erin Cluley Gallery, which is showing in its gallery Nic Nicosia's show, "At Home on Time."

In its Irving Boulevard space, And Now gallery is showing the work of Dustin Pevey through April 22.

Barry Whistler Gallery has a new show in its space, touting the work of Darryl Lauster, whose "Less the Remainder" continues through May 13. Ro2 Art is at the fair, showing the work of, among others, Jeff Parrott, Alexander Paulus and Camilla Cowan.

PDNB Gallery has running in its Glass Street space shows by Jeanine Michna-Bales, "Through Darkness to Light: Seeking Freedom on the Underground Railroad" and "True South: A Group Exhibition." Both continue through May 6.

The gallery's amazing Frida Kahlo show, which coincides with the lavish exhibition of Mexican contemporary art on view at the Dallas Museum of Art, continues through July 15.

In its home space, Conduit Gallery is showing the work of Gabriel Dawe, Sarah Ball and Ellen George, whose work can be seen through May 13. One of my favorites is Valley House Gallery & Sculpture Garden, which has a dual exhibition running through April 29: John Hartell "Paintings (1955 to 1993)" and Mark Messersmith ("Pay the Thunder No Mind -- Listen to the Birds and Hate Nobody").

"They're amazing visuals," says the artist who calls himself Frank X. Tolbert Squared, since his dad, chili connoisseur Frank X. Tolbert, used to be a Texana columnist for The Dallas Morning News. "They're like something that flies that happens to be abstract. Their coloring, their markings, their features are overwhelming."