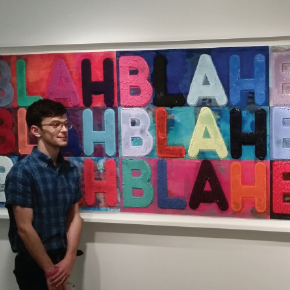 Not everyone knows what to expect when they are invited to the Dallas Art Fair. One guest was expecting something more like the Fort Worth Arts Festival. Another went to the Deep Ellum Arts Festival by mistake but realized their error only when they couldn’t find the correct booth number (the heavy metal music should have also been a clue).

Once you’ve been to the Dallas Art Fair, you will not mistake it for any other event in North Texas. Gallerists travel from throughout the world for the event. We met people and saw art from Dublin, Tokyo, Mexico, and Dubai. There are Mexican galleries with Art from Toronto and International galleries representing American artists. There is groundbreaking contemporary art as well as art that draws more firmly from tradition and also masters of the past (mostly from 1950-1980, don’t think Old Masters).

The alliance between the Dallas Museum of Art and the Art Fair makes a very positive impact. By the time we visited the fair, the museum had acquired six works from variousparticipating galleries. Prominent labels are placed next to new acquisitions. It is encouraging to see DMA is collecting contemporary art, but perhaps more importantly, patrons understand that the art fair is a level playing field. Connection matters, but connoisseurship with discretionary spending budget matters more.

Dallas galleries are handsomely represented. Valley House, taking a large space on the second floor, greets everyone with a formidable self-portrait of Sedrick Huckaby. He happened to be around during our visit. Andrea Rosenberg’s works, the focus of Barry Whistler Gallery, seem to flow in and out between layers of emotions. The endeavor of drawings is marvelously registered with poetic and intuitive touches.

Cris Worley’s gallery brought a set of bone carving sculpture from Celia Eberle. The Dead of Night, like other works by Eberle, are conceptualized and executed as one of the kind. Winged animals with feet sprawl over a side wall. (I only wish that the wall could be painted in black.) Anonymous, mysterious, fearful and vulnerable — They speak all of these simultaneously. I would have bought them all to maintain that collective effect, but they were all marked with red dots at our visit.

Perhaps the most exciting part of an art fair to see the art world unfolds at your feet. Art, more than any other type of commodity, stays true as an idiosyncratic entity; yet live on a global platform. Ideas are disseminated as freely as talents exchanged and body of works traveled.

If I have to pick one artist among all the artworks I have seen, that would be Derek Fordjour. Oddly, the Memphis-born, New York-based artist, with a Ghanaian heritage, is represented by a gallery from Torino, Italy. His autobiographical portraits remind me of Aaron Douglas, particularly his assertiveness of the monumentality of the subject matter. The central figure seems to be absorbed visually and metaphysically by the surrounding, yet always stands out, even with a hint of realism. I was blown away by the way he used collages, through thick and thin, old and new, to create a scintillating surface.

Virginia Jauregui of Paramo Gallery from Guadalajara was excited to see the Mexican art exhibition from DMA. (The catalog from the exhibition was the first thing we spotted.) She should be because she showcased several works by German Cueto, who is included in the exhibition. A virtuoso across different mediums, Gueto’s works from 1940’s are more European advant-guarde than muralist styles of Rivera. Paramo Gallery also has contemporary works, including paintings by Veronika Pausova, a Czechborn artist living in Toronto. The flattered space, largely arranged with deep hue blocks, is interrupted by the intrusion of objects in realism styles. They look fun with artworks created more than seven decades ago.

Asmaa Al-Shabibi of Lawrie Shabibi Gallery in Dubai introduced me Khatam-based works by Farhad Ahrarnia. Khatam is a Persian decorative method to use micro-mosaic (of bone, wood, copper, silver and brass) to form imageries. The Islamic patterns, embellishing both the panels and their frames, shimmer under spotlights. That’s what caught me in the first place to question whether those meticulous patterns were actually wallpaper. Ahrarnia applies the ancient marquetry skills to rather modernism designs, paying homage to constructivism and cubism masters. The idea of an intersection of Russian and Persian influence, represented by a gallery from the United Arab Emirates seems so remote from Dallas, yet the imageries are as vivid as you can get. That’s I have enjoyed the most from the Dallas Art Fair.