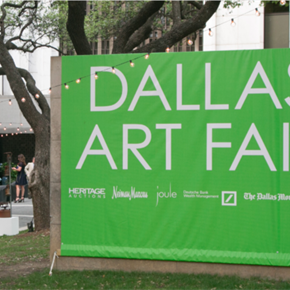 April is always a really good month for the arts in Dallas — so good that Dallas Mayor Mike Rawlings decided to ordain it "Dallas Arts Month" — and the Dallas Art Fair from April 6-9 is one of the chief attractions.

Against at least a few odds, the fair is now in its ninth year and boasting its highest profile exhibitor list yet. Over the course of three days this weekend, the Fashion Industry Gallery, located next to the DMA in the Dallas Arts District, will host nearly 100 galleries from around the country and world in a celebration of art collecting and its excesses.

In what is perhaps the biggest news of the fair, the powerhouse Gagosian Gallery will be attending the fair for the first time (showing the work of Piero Golia, who recently installed his work Chalet at the Nasher Sculpture Center). Gagosian will be joined by other New York institutions including Lehmann Maupin and Skarstedt, as well as nearly 40 galleries from abroad.

Some of Dallas’ brightest galleries will also have booths, including Talley Dunn, Valley House, William Campbell, Barry Whistler, Conduit, Cris Worley, Ro2 and PDNB. If you want a taste of how the art world elite spend their days, a few hours in the FIG this weekend will expose you to a world of art buying and dealing most of us rarely have the chance to encounter.

The Dallas Art Fair team always programs an array of exclusive donor events in addition to the fair itself, but this year they’ve also organized a number of events that are open to the general public. And if the fair isn't your thing, there are plenty of other options this weekend to see some really good art.

Here’s our almost complete list of art events with which you can fill your weekend.

Friday at noon catch "Forecasting," a selection of video work by artists featured at the fair and curated by Justine Ludwig, senior curator at the Dallas Contemporary. The films will repeat each day of the fair at noon.At 2 p.m. watch a documentary about Dallas-based artist Valton Tyler (some of whose work is currently on view at the Amon Carter Museum). The documentary, Flesh is Fictionwas made by Edward M. Goméz and Chris Shields and screens at the FIG.At 4 p.m. hear from curator and scholar Barbara Rose and artist Christopher LeBrun, president of the Royal Academy, as they converse about the role of painting throughout history.Friday night also features the Artist Uprising sponsored concert “The Dallas Music Experience” curated by Lee Escobedo. It’s a great lineup featuring some of the city’s best musicians including Sam Lao, Bobby Sessions, Party Static and more, and takes place right outside the FIG starting at 4 p.m.Friday is also the opening of the much anticipated Dallas Contemporary spring shows. For this show the DC is presenting three solo exhibitions by female artists: Ambreen Butt, Pia Camil and Keer Tanchak, each of whom explores in her own unique way issues of feminism, global identities, art-making and art history.Arts+Culture Texas and the Meddlesome Moth are presenting a concert/art event of their own in the Design District called We Own the Night on Friday evening, an occasion which Liliana Bloch of Liliana Bloch Gallery is using to unveil her latest URBANO project which will feature works by Ann Glazer, Shawn Mayer and Colton White.All weekend, but beginning on Friday, Jörg Widmann, a composer and clarinetist, takes up a mini residency at the Nasher as part of Sean Kopp’s Soundings concert series. Over the course of three days, Widmann will perform three different pieces including the North American premiere of his song cycle Das Heiise Herz.

The Nasher’s 360 Speaker Series presents a panel discussion on the changing art market at 2 p.m. Saturday that’s free with admission to the museum.On Saturday, most of the non-art fair action is in Expo Park with Shelby David Meier’sthe difference between a duck opening at 7 p.m. at Beefhaus and across the street four solo exhibitions and three project space shows opening at 500x. Clint Bargers, Bernardo Cantu, Rachel Muldez, Justin Strickland will all show new work; Seth Lorenz curates work by Kelsey Heimerman and Sammy Rat Rios; and Tammy Mercure’s Blue Library Vol 2: Conversations, a collection of photographers responding to the work of other photographers, and Size Doesn’t Matter: 6 inches or less, a show of small work by 500x members, round out the space.Throughout the weekend you’ll also have the chance to visit the Vignette Art Fair, an inaugural effort by the Texas chapter of the Women’s Caucus for Art. All weekend you can view the work in this satellite, all-female and female-identifying artist fair at the Women’s Museum in Fair Park. Curated by Chelsea Pierce, the fair’s theme is “Notes From the Center.”

There is plenty of time Sunday to revisit the art fair itself, but if you’re interested in the politics of the MFA in relation to artist organized spaces, the fair is hosting a discussion on the subject at 2 p.m. at the FIG.