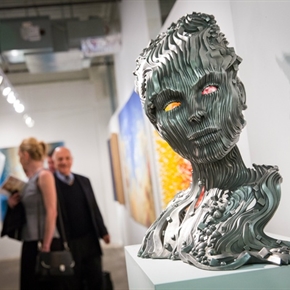 If you haven't caught festival fever in Dallas yet, this weekend will win you over. In addition to the final few days of the Dallas International Film Festival, there are multiple other festival-type events taking place, along with some  world class  soccer, theater in the great outdoors, a unique Easter celebration, and an appearance by a huge pop star.

Below are the best options for your precious free time Thursday through Sunday. Don't like what you see? Lucky for you, we have a much longer list of the city's best events.

U.S. Women's National Soccer Team vs. Russia
It will be another two years until the next Women's World Cup, but that doesn't mean you can't work up a little patriotic fervor as the U.S. Women's National Soccer Team faces off against Russia in an international friendly. The game, taking place at Toyota Stadium in Frisco, will feature players like Carli Lloyd, Alex Morgan, Megan Rapinoe, and more.

Main Street Garden presents Movies in the Park
In honor of The Statler's reawakening, Main Street Garden presents the Movies in the Park series. Beginning in the 1950s, the series showcases an iconic movie from each decade, making the way back to the future. The classic Elvis Presley movie Jailhouse Rock kicks things off, followed in subsequent months by Breakfast at Tiffany's, Superman, Ferris Bueller's Day Off, Forrest Gump, and Best in Show.

Dallas Theater Center presents Electra
Building on Dallas Theater Center’s unique approaches to Greek tragedies, audiences can expect the unexpected in this one-of-a-kind production that takes place outside at Annette Strauss Square. Electra’s mother murdered her father, and Electra just can’t let it go. With the return of her brother Orestes, the siblings seek justice … or is it vengeance? The production runs through May 21.

Old 97's County Fair
Two of Dallas' favorite musical institutions, The Old 97's and HomeGrown Music and Arts Festival, have joined forces to create a festival experience unlike any other. The festival at Main Street Garden features performances by The Old 97's, Lucinda Williams, Mavis Staples, and others; a 40-foot Ferris wheel; corn dogs to hold you over until Big Tex is back; and plenty of opportunities to try your luck in the midway.

Ariana Grande in concert with Little Mix and Victoria Monet
Pop singer Ariana Grande has led quite the life for only being 23 years old. She starred on the Nickelodeon shows Victorious and Sam and Cat before transitioning into a full-time singing career in 2014. Each of her first three albums have debuted at No. 1 or 2 on the Billboard charts, and she's worked with everybody from Nicki Minaj to John Legend. She performs at American Airlines Center alongside Little Mix and Victoria Monet.