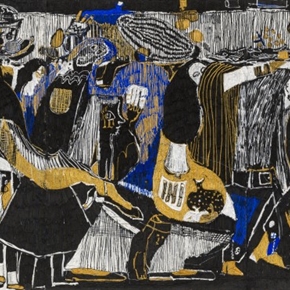 Curators from the Dallas Museum of Art went on a bit of a shopping spree this week. The museum acquired works from six artists who are showing at The Dallas Art Fair. And the Art Fair is picking up the tab, through its acquisition program. Last year, supporters of the Fair raised $50,000 to give to the museum to acquire new work. This year, the amount doubled to $100,000.

The Art Fair opens today at the Fashion Industry Gallery. More than 90 galleries from around the world will try to entice collectors to buy works from legendary artists and up-and-comers.  The museum’s newest works will remain on display through the fair, which ends Sunday, Brandon Kennedy, the Fair’s director of development, says it’s worth a visit, whether you’re in the market for art or not.

“It’s a great chance for the visitors who are coming to the fair to see art work that are of a museum caliber that will actually be staying here in Dallas at the Museum. So it’s really the best of all possible worlds.”

Summer Wheat (b. 1977, Oklahoma City) received an MFA from Savannah College of Art and Design and a BA from University of Central Oklahoma. Wheat will participate in her first museum solo exhibition presented by the Oklahoma Contemporary, Oklahoma City, OK (2016). Her work has been included in recent museum exhibitions, including ICA Collection: Expanding the Field of Painting (2013–14), Institute of Contemporary Art, Boston; Paint Things: Beyond the Stretcher (2013), deCordova Museum and Sculpture Park; and Paradox Maintenance Technicians: A Comprehensive Manual to Contemporary Painting from Los Angeles and Beyond (2013), Torrance Art Museum, Torrance, CA. Recent solo exhibitions include Everything Under the Sun at Pocket Utopia, New York City, and Walk-In Pantry (2015), Fridman Gallery, New York City. Summer Wheat lives and works in Ridgewood, Queens.

Katherine Bradford (b. 1942, New York) lives and works in New York City, attended Bryn Mawr College and holds an MFA from SUNY Purchase. Her work is held in the collections of the Metropolitan Museum of Art, the Brooklyn Museum of Art, the Portland Art Museum, Maine, and the Farnsworth Museum, Maine. Bradford has had recent exhibitions at CANADA, LLC, New York and Adams and Ollman, Portland, Oregon. Broadly recognized for her achievements, she has received a Guggenheim Fellowship, Joan Mitchell Foundation Award, Pollock-Krasner grant, and two awards from the American Academy of Arts and Letters in New York. Bradford is a senior critic Yale University.

Derek Fordjour (b. 1974, Memphis) was born in Memphis, TN to parents of Ghanaian heritage. Fordjour is a graduate of Morehouse College in Atlanta Georgia, earned a Master’s Degree in Art Education from Harvard University and an MFA in painting at Hunter College. His work has appeared in exhibitions at Roberts & Tilton Gallery in Los Angeles, Sotheby’s S2 Gallery in New York and Luce Gallery in Turin, Italy. His work has been reviewed in the New York Times, Los Angeles Times, Huffington Post and Brooklyn Rail. His work appears in several collections throughout the US and Europe. He is currently Artist-in-Residence at Sugar Hill Museum in New York City.

Andrea Galvani (b. 1973, Italy) lives and works in New York and Mexico City. Drawing from other disciplines and often assuming scientific methodologies, his conceptual research informs his use of photography, video, drawing, and installation. Galvani’s work has been exhibited internationally, including at the Whitney Museum, New York, NY; 4th Moscow Biennale for Contemporary Art; the Mediations Biennale, Poznan, Poland; 9th Bienal of Contemporary Art of Nicaragua; Aperture Foundation, New York, NY; The Calder Foundation, New York, NY; Mart Museum of Modern and Contemporary Art, Trento, Italy; Macro Museum, Rome, Italy; GAMeC, Bergamo, Italy; De Brakke Grond, Amsterdam; Oslo Plads, Copenhagen, Denmark, among others. In 2011, he received the New York Exposure Prize and was nominated for the Deutsche Börse Photography Prize. Galvani earned a BFA in Sculpture from the Academy of Fine Arts in Bologna in 1999, and his MFA in Visual Art from Bilbao University in 2002. He has been a visiting artist at NYU (2009/2010) and has completed artist residencies at the Location One International Artist Residency Program New York (2008), LMCC Lower Manhattan Cultural Council (2009), M.I.A. Artist Space Program/Columbia University School of the Arts Brooklyn, NY, (2010). From 2006 to 2009, he was a professor of Photographic Language and the History of Contemporary Photography at the University of Carrara for Fine Arts in Bergamo, Italy.

Matthew Wong (b. 1984, Toronto) currently lives and works in Hong Kong and Zhongshan, China. He received a B.A. in Cultural Anthropology from The University of Michigan, Ann Arbor and MFA in Creative Media (Photography) from City University of Hong Kong. With an underlying focus on landscapes, Wong’s work derives inspiration from various art historical precedents, ranging from classical Chinese painting, brushstrokes like that of Chaim Soutine and Vincent Van Gogh, and abstract expressionism.