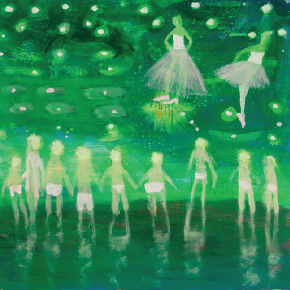 A year ago, the Dallas Art Fair launched an ambitious acquisition program, in which the Dallas Museum of Art, with funding by the fair's foundation and private donors, would acquire works created by artists exhibited at the fair. This year, the award grew by 100 percent, from $50,000 to $100,000.

At a Thursday morning press conference, officials for the fair and the DMA met to announce the winner. But this year, the DMA chose to go plural, as in winners, using the $100k to acquire seven works by six different artists whose work is being shown at the fair, which opens to the public on Friday and runs through Sunday.

"We looked at every single gallery, every single artwork," said Gavin Delahunty, the DMA's senior curator of contemporary art, who led the group making the selections. "We are very, very proud and very thrilled with the artists we selected."

Delahunty called the work at this year's fair "exceptional" and saluted those who assisted in picking the winners. He said they considered it "important" to weigh diversity in making their choices, citing "gender, ethnicity, identity." The works will become part of the DMA's permanent collection.

The pieces selected include: ­ A sculptural painting by Adian, a Fort Worth­bred artist whose Levelland refers to a town in West Texas. ­ The painting Prom Swim, by Bradford, a 75­year­old abstract painter. ­ An autobiographical work that speaks to the Ghanaian heritage of Fordjour, who hails from Memphis, Tenn. One of the works by Fordjour is a portrait, the other a more abstract composition. ­ Galvani's surreal photograph that blurs the boundary between art and science. ­ Summer Wheat's expressive painting that "puzzles with its fiber­like surface." ­ And Hong Kong­based Matthew Wong's "beautifully rendered, offbeat picture."

As for the founding and returning donors, they include: Tricia and Gil Besing, Linda and David Rogers, Susan and Shawn Bonsell, Gowri and Alex N.K. Sharma, Marlene and John Sughrue, and The Dallas Art Fair Foundation. Among the donors new to 2017 are Cliff Risman, David and Zoe Bonnette, Fraser and Rhonda Marcus, Shannon and Dallas Sonnier, Steven and Anne Stodghill.