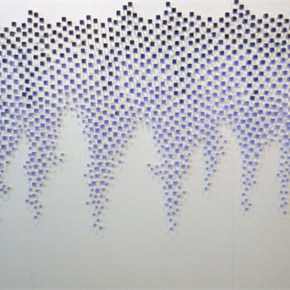 Let’s be blunt—the 2017 Dallas Art Fair promises to be the best edition yet. And it's not even because of any radical moves—it's the accumulation of small victories over time.

Last Thursday at Neiman Marcus, gallerists mingled with patrons and staff members of the 2017 Dallas Art Fair. The mood was festive. There was almost a sense of nervous excitement, the barely-contained enthusiasm of someone who has a great poker hand but can barely believe it. Let’s be blunt—the 2017 Dallas Art Fair promises to be best edition yet. There haven’t been any radical moves this year (no new location, no huge deviation from the format) and yet, it is perhaps the accumulation of small victories, the growth that can come with consistency and incremental progress, that has added up to what promises to be a banner year.

Here are five reasons I am excited to attend the Dallas Art Fair.

Gagosian Gallery headlines a deep roster of galleries from around the world.

Gagosian Gallery is exhibiting this year at the Dallas Art Fair and it is impossible for that not to feel like a game changer. Gagosian, one of the most powerful galleries in the world, with almost limitless options and resources, has surveyed the landscape and decided that it is fine to show in Dallas, Texas. How did this happen? Well, certainly the Nasher Sculpture Center deserves some credit— in 2015 to 2016 the museum held an exhibition by artist Piero Golia entitled Chalet Dallas.

Golia’s Chalet Dallas certainly was met with controversy by some in the Dallas arts community, particularly when it came to the issue of cultural appropriation. However, in retrospect, Chalet Dallas seemed to help pave the way for the Nasher’s Artists Circle and its critically acclaimed programming led by Lee Escobedo and Karen Weiner, which opened up the museum to local artists of all disciplines in previously unexplored ways. Golia is represented by Gagosian and will receive solo treatment at the Gagosian booth at the Dallas Art Fair with paintings and a sculptural installation directly inspired by Chalet Dallas.

Dallas-based galleries are poised to stand out (once again).

One of my favorite things about the Dallas Art Fair is to see how well our local galleries do among their national and international peers. AND NOW, Barry Whistler Gallery, Conduit Gallery, Cris Worley Fine Arts, Erin Cluley Gallery, Photos Do Not Bend Gallery, Ro2 Art, Talley Dunn Gallery, and Valley House Gallery and Sculpture Garden are representing for the home team. Conduit, Whistler, Worley, and Dunn typically have great booths, and don’t miss Zeke Williams and Nic Nocosia at Erin Cluley, as well as Yuni Lee and Bumin Kim at Ro2 Art.

Collaboration with other art institutions.

Today, thePower Station opens a show by Steven Parrino continuing its tradition as serving as the unofficial opening on the Dallas Art Fair. The Goss Michael Foundation hosts a breakfast Friday morning and the Dallas Contemporary opens shows by Pia Camil, Keer Tanchak, and Ambreen Butt in the evening. The Nasher Sculpture Center hosts the panel New Pitches: Reframing Artists for a Changing Market on Saturday afternoon.

Local programming has been expanded.

New Director Kelly Cornell has longstanding roots in the Dallas art scene and so does newly hired Director of Outreach Brandon Kennedy. So perhaps it is no surprise that this year contains some of the most exciting local partnerships that the Dallas Art Fair has produced in years. AURORA will present a video program called Forecasting at the Art Fair this year. On Friday, Lee Escobedo’s new publication Artist Uprising is presenting an evening of Dallas Music featuring Sam Lao, Cygnus, Party Static, Sea Lion, Bobby Sessions, and a DJ set by Picnictyme. On Sunday one can catch talks by Dallas-based art stars Justine Ludwig and Noah Simblist.

The Dallas Art Fair Preview Gala will always hold a special place in my heart. Writing about the gala in 2013 is how I became a professional arts writer. This year there will be no shortage of Ruinart champagne, interesting people to talk to, and interesting art to look at—then after the gala there always seems to be something going on at the Joule hotel. The Eye Ball across from the Joule on Saturday has somehow become even more illustrious than the gala itself. Yet, as the art world descends upon Dallas there are sure to be smaller more intimate affairs at local bars like the Round Up, Double Wide, Lee Harvey’s and, of course, Midnight Rambler. There will be breakfasts, lunches, brunches, and dinners. Soak it all in, because it only happens once a year.