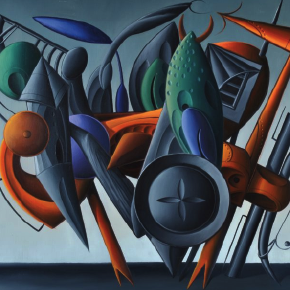 The start of April packs enough culture and art action into Dallas’ visual mise en scène to comprise its own season. Here’s where to be, who to see, what to collect, the biggest buzz, and the prime parties.

For its ninth year at Fashion Industry Gallery (FIG), the Dallas Art Fair soars to more than 90 galleries. But it’s the quality, not the quantity that has garnered attention, not only in America (especially New York) but internationally. Three­dozen dealers hail from London, Bogota, Dublin, Amsterdam, Brussels, Paris, Monterrey, Geneva, Madrid, San Juan, Dubai, Berlin, and Tokyo.

Go­Go Gagosian: One of 30­-plus new exhibitors is the booth that’s the talk of town: the $1 billion global Gagosian empire. Will Larry Gagosian make a Dallas personal appearance? You’ll only have to wait until Thursday to find out. Curating a special monographic presentation, Gagosian rolls out a cheeky solo that’s locally topical, tapping Italian­born and L.A.­based Piero Golia.

No stranger to Dallas audiences, Golia will create an installation based upon his popular evocation Chalet Dallas at the Nasher Sculpture Center (2015 through 2016); included will be a series of Mariachi Paintings, which commemorate his Nasher closing act set to a band of mariachis. The canvases are formed from stretched and cut swatches of the actual stage curtain that came down as an exhibition finale; text fragments are inscribed in cursive letters from the curtain’s memorable message, straight out of Looney Cartoons: “That’s All Folks!”

Collectors will vie for bronze sculptures based upon Golia’s Chalet furniture, as well as a miniature model of the artist’s fictional studio in the aftermath of the Chalet’s disassembly.

Watch Manhattan dealer Bortolami Gallery for an engaging solo by Anna Ostoya, whose work is loosely figurative/architectural and utterly original. And we never miss a visit to Jill Weinberg’s Lennon, Weinberg, Inc. for the best tales and infinite knowledge of Joan Mitchell, who was a mentor.

You’ll always find a killer Mitchell (or two) in the booth, as well as two other good bets: elegiac canvases by Texas­Maine painter Carl Palazzolo and glorious colorfield canvases by the late Stephen Mueller.

The Internationals: Pay attention to Galerie Perrotin, based in Paris and New York with outposts in Tokyo, Hong Kong, and Seoul. The gallery is home court for Daniel Arsham, who has been exhibited in Perrotin’s Fair booth every year since 2015. Arsham also generated buzz and acclaim for his collaboration with Pharrell during Dallas’ 2016 Soluna.

The internationally recognized artist mines the wisdom of ancient civilizations, obsessively incorporating materials imbued with talismanic auras. Nature, science, history, the supernatural, and the unexplained are touchstones of his almost alchemical installations and sculpture.

Independents Arise: Indie dealers, especially of the international bent, add a depth and earnestness to this Fair that may even be missing from Art Basel’s iterations. Chief among these is Misako & Rosen of Tokyo, whose exhibition program often features small­scale treasures that demand close viewing — the DMA regularly acquires from them — and Brit import Workplace Gallery (Gateshead and London), where the Lancaster twins, Laura and Rachel, sold out last year even before the Preview Gala.

Then beeline to Dubliner Kerlin Gallery, with its stable of Callum Innes’ vapory canvases and Liam Gillick’s futuristic architectural interventions. From another part of the globe, check out Lawrie Shabibi, Dubai, one of four dealers that the Dallas Museum of Art shopped in 2016 with its acquisition budget of $50,000 (now doubled for 2017).

San Francisco notables include Jessica Silverman Gallery and Anthony Meier Fine Arts; at Meier, we predict works by Tony Feher and Donald Moffett will be catnip for collectors.

Rooting for the Home Team: Ten Dallas dealers also take up residence at the Fair — a healthy 10 percent of exhibitors. Aesthetics and exhibition programs vary from the messy vitality of Ro2 Art with its democratic price structure and salon­style install, to the blue­chip presenter of Texas art, Talley Dunn Gallery.

Erin Cluley again curates a booth with her smart new (mostly) Texans. Among the best news for photo collectors, PDNB Gallery returns after an absence of several years; don’t miss Adam Fuss, and other canonical photographers.

For entrée to most of the above, secure a Patron Pass. Head to dallasartfair.com ASAP if you haven’t already done so.

Powering Up: The Power Station’s posthumous survey for the late American nihilist master Steven Parrino is a gem of a contemporary show (through June 16). Titled “Dancing on Graves,” its opening on Wednesday, April 5, is the unofficial kickoff to the Fair action, and the beginning of a nonstop five days of mega art activity.

A Side of Music: For the first time, music programming is in the mix. It all goes down Friday, April 7, 4 to 7 pm, on the lawn of Fashion Industry Gallery. PaperCity music critic Matthew Ramirez broke the story online: “Focusing on local, homegrown talent, art critic Lee Escobedo (of Nasher Sculpture Center Magazine, Berlin Art Link, and Art Desk) has curated an exciting lineup of performers.

Headliner Sam Lao is a fierce hip­hop emcee, whose fiery lyrics and vibrant ‘Pineapple’ video were featured in Paper magazine. Read about the full lineup here.

Other Walls Piggyback: Many Dallas art galleries plan stellar programming to take advantage of the amplified energy and outof­ town eyes. Case in point is Texas painter Howard Sherman, a UNT grad with a hefty following of Dallas collectors due to his raucous ab­ex canvases.

Sherman, whose canvas also graces the cover of the book Texas Abstract, debuts with Circuit12 Contemporary, timed to the Fair — a must­see satellite show in the Dallas Design District (through May 6).

Mexico and Spain Calling: A blockbuster and a jewel, each employing connoisseurship and scholarship, are perfectly aligned at the Dallas Museum of Art (“Mexico 1900­ 1950,” featuring Kahlo, Orozco, Rivera, and other avant­gardists, through July 16) and the Meadows Museum (“Between Heaven and Hell,” an epic drawing survey of Spanish 17th­ century master Jusepe de Ribera, through June 11).

These shows alone would be enough for any collector or art acolyte to pilgrimage to Dallas.

The Goss­-Michael Foundation rolls out a solo for painter Billy Childish (also in the stable of Fair exhibitor Lehmann Maupin, through April 14). Childish’s disarming figuration makes him a compelling original.

Talk Architecture: On Wednesday, April 5, the architect to the museum and gallery world, Annabelle Selldorf speaks at the Dallas Museum of Art, in collaboration with the Fair. Selldorf is an heir to the influence wielded by Andrée Putman; she dishes design and behind­the­scenes sensibilities from commissions for eminent clients including the Frick Collection, Neue Galerie, Hauser & Wirth, the Whitney, and the Venice Biennale.