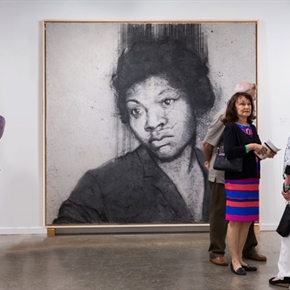 The Dallas Art Fair is This Week, But It’s Hardly the Only Thing Happening - April 4, 2017

The Dallas Art Fair is not the only thing happening this week. In fact, it’s not even the only art fair happening this week. The last high profile attempt to mount an alternative to the annual blowout happened in 2011, when Brian Gibbs, the gallery director of The Public Trust, launched SUITE at the Belmont Hotel. Six years later, we now have another serious attempt: The Vignette Art Fair, which runs from April 5 to April 9 at the Women’s Museum in Fair Park. It is an effort by the Texas Women’s Caucus for the Arts to showcase artwork from women and artists who identify as women.

The Vignette Art Fair will consist of an exhibition, Notes from the Center, curated by Dallas Museum of Art curatorial assistant Chelsea Pierce. The days offer several all-female panel discussions on topics such as Art and Community and Art and Collecting. Dancer Danielle Georgiou will perform at the exhibition opening from 6 p.m. to 9 p.m. on Wednesday. Panel discussions include Catherine Cuellar, Jin-Ya Huang, Jennifer Scripps, Constance White, Jessica Ingle, Joan Davidow, and Cassandra Porter.

You know it must be the busiest week of the calendar year when this is just one of three openings on a Wednesday evening in Dallas. Around the corner from Vignette Art Fair is the opening of Dancing on Graves by Steven Parrino (1958-2005). The show will feature a five-minute video from which it draws its name, as well as monochromatic paintings in black, white, and silver that have been misshapen and distorted by the artist. In the same area, the Reading Room will be open from 6 p.m. to 8 p.m., showing work by Chicago-based artist Deb Sokolow whose hand-drawn art books take on politics and history that point to our current events, complemented with bits of wry commentary between laugh-out-loud humor.

Across town in the Trinity Groves part of West Dallas, the latest iteration of Temporary Collectives, a project that mixes graduate students and professors from six North Texas universities. The one time opening is from 6 p.m. to 9 p.m. at 500 Singleton. Now in its third year, Temporary Collectives combines work from artists attending Texas Christian University, The University of North Texas, The University of Texas Arlington, The University of Texas Dallas, Southern Methodist University, and Texas A&M – Commerce. Expect a significant site-specific group exhibition. It is great to see this project—initiated by UTA artist and teacher Stephen Lapthisophon—gather support from area programs while giving opportunities for students to meet and collaborate.

The week does not let up before the Art Fair kicks off on Friday. On Thursday evening BlkART214, a group show curated by UNT studio art professor Annette Lawrence, opens at the South Dallas Cultural Center. UNT assistant professor and sculptor Alicia Eggert is organizing a talk and dance performance at her stellar show Partial Visibility at The MAC in the Cedars. Friday, The Dallas Contemporary opens three solo shows by artists Ambreen Butt, Pia Camil, and Keer Tanchak. Around the corner, Galleri Urbane, Public Trust, and Liliana Bloch team up with Art & Culture Magazine, Meddlesome Moth, and Art Con for a Design District block party called We Own The Night. On Saturday, there are openings at Beefhaus for Shelby David Meir and at 500X featuring a slew of artists including Bernando Cantu, Rachel Muldez, Kelsey Heimerman, and Sammy Rat Rios.

Then on Sunday, if you haven’t had enough art, there is still the Dallas Art Fair. Try to see it all. This much goodness only comes once a year.