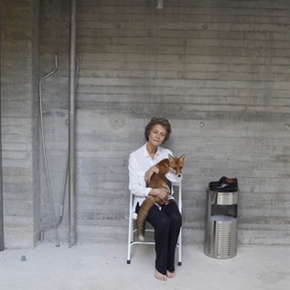 Bigger, Bolder, and Better Than Ever — Dallas Art Fair is April’s Most Essential Event - April 3, 2017

Fasten your seat belts, it’s going to be a bumpy week. With more boldface galleries, more satellite soirees, and a new soundtrack to boot, this is sure to be one fun and frenetic Art Fair.

"The addition of many new globally recognized dealers and tastemakers will make this the most exciting and international fair to date," says the Fair’s Kelly Cornell of this year’s ninth edition. "Dallas' cultural influence shines with the noteworthy programming happening throughout the week, particularly 'México 1900–1950: Diego Rivera, Frida Kahlo, José Clemente Orozco' at the Dallas Museum of Art and Pia Camil, Keer Tanchek, and Ambreen Brutt at the Dallas Contemporary."

In addition to blue-chip galleries like Gagosian Gallery, Lehmann Maupin, Simon Lee Gallery, Skarstedt Gallery, and Shane Campbell Gallery joining the over 90-strong list of exhibitors, also notable this year is the second iteration of the Dallas Art Fair Foundation Acquisition Program, selected by the Dallas Museum of Art’s Hoffman family senior curator of contemporary art Gavin Delahunty. Funding for the Fair piece or pieces that will be donated to the DMA’s permanent collection has doubled to $100,000, giving far more room in the budget for a work from a boldface name or a larger selection of art.

Here are a few more can’t-miss highlights to look forward to during the week:

POWER UP
When sex, death, and painting align, you’ll find the edgy oeuvre of the late New York artist Steven Parrino, who sadly passed away in a motorcycle accident at the age of 46. Parrino’s work lives on at the Power Station, with an exhibition of his monochromatic canvases, sculpture, and works on paper Wednesday, April 5, from 6 to 9 pm. The five-minute Dancing on Graves video short that gives the show its name is sure to be a highlight in the thought-provoking show.

BOXED IN
Off-the-beaten path (and by appointment only), the Box Company has nonetheless drawn a quiet but fervent following for its ambitious programming, most recently Austrian artist Hermann Nitsch’s and Mexican performance artist Teresa Margolles’ visceral Dallas Biennial show.

Conveniently installed during Fair time, the more homegrown photographic collages and paintings by Dallas-based Luke Harnden in his show "Borborygmi" address individuality and collectiveness alike. Represented by Barry Whistler Gallery, Harnden's work is joined by a small collection of drawings by the late John Wilcox, who is also in the Whistler stable. Contact jason@boxco.co for a viewing.

LIGHT SHOW
One of the most unique experiences in our city is Aurora’s merging of light, video, and sound.  Out-of-towners get to experience what this semi-annual public art event does best with a “Forecasting” program of video artworks curated by Dallas Contemporary’s director of exhibitions/senior curator Justine Ludwig.

Says Ludwig about the programming, “In this time of great global change, the theme of the future is especially fertile subject matter for artists.”

Experience the thrill (or terror) of the unknown on April 7 and April 8, from noon to 1 pm at Beck Imaginarium inside the Fashion Industry Gallery, or turn up April 9 for a screening and Q&A with Ludwig at noon.

INDEPENDENT SPIRIT
It could be said that when it comes to million-dollar paintings and indie rock, never the twain shall meet. But this year, Artist Uprising magazine is out to prove this adage wrong while injecting some energy into the Fair with the “Dallas Music Experience.”

Performances by local bands Sam Lao, Cygnus, Bobby Sessions, Sealion, and Party Static (plus a DJ set by Picnictyme) will take over the lawn of the Fashion Industry Gallery on April 7 from 4 to 7 pm.

“I think that’s something [Uprising editor Lee Escobedo] is interested in, connecting different groups of people," says host (and artist) Randy Guthmiller. "Who can we bring the younger people that are hip to the art fair, and how can we get tastemakers from all over the world to see there’s cool shit happening all over here. I think we’re testing the waters and also pushing the boundaries of what the Art Fair can be. It’s the one time of year to take full advantage of all eyes being on Dallas.”

PHOTO REALIST
Known for his ability to capture the unguarded moment, superstar fashion photographer Juergen Teller pulls no punches with the celebrities and supermodels examined by his lens. Teller, whose blown-up images of delectable dishes adorn the walls of Mirador, the restaurant atop the mega-boutique Forty Five Ten on Elm Street, will be on hand on April 7 from 4 to 6 pm at the boutique for a book-signing of the glossy cookbook Eating at Hotel II Pellicano, featuring his extravagant images.

CONTEMPORARY CULTURE
It may seem like women’s rights are eroding at lightning speed these days, but the Dallas Contemporary is flipping the script by giving three pioneering female artists the opportunity to address challenging subject matter in a discursive space, with their exhibitions opening April 7 at 7 pm.

Curated by the museum’s Ludwig and Lilia Kudelia, the show includes the work of Pakistan-born, Texas-based Ambreen Butt, who addresses the themes of feminism, globalization, and identity in her ornamental installations.

Mexico City artist Pia Camil will unveil a selection of two-dimensional pieces along with a site-specific work exploring consumer culture and the often-fraught relationship between her country and the United States. Canadian Keer Tanchek adds to the experience by addressing the way we view art history in contemporary translations of works by male painters Fragonard, Watteau, and van Gogh.

With projects like the Gallery Tally revealing that male artists trump female artists in representation worldwide, it’s refreshing for this spotlight show to recognize that the future is indeed female.

NIGHT MOVES
Also occurring on April 7 is the “We Own the Night” event (presented by Arts+Culture Texas and the Design District’s Meddlesome Moth gastropub), which will be a high-energy block party where music, dance, and fine art align.

Encompassing exhibitions from local favorites Galleri Urbane, Liliana Bloch Gallery, and the Public Trust, along with performances from Dallas Black Dance Theatre, Bruce Wood Dance Project, the theater group Dead White Zombies, and bands French 75 and Honor System, the 7 to 11 pm event is a way to support the local scene so that the energy of the art fair continues after all the visiting gallerists have gone.

Tickets are $25, or $50 for a VIP ticket that also includes entry to the Art Fair Saturday or Sunday.

CROWN JOULE
Chicly appointed boutique hotel The Joule has a local reputation as an art enclave, with multimedia from the likes of modern artists Tony Cragg, Richard Phillips, Leandro Erlich, and Catherine Opie joining the collection of salvaged midcentury mosaics by Millard Sheets displayed throughout the building. Headington Companies’ art curator John Runyon will give Fair holders a backstage look at what went into the this covetable collection at 4 pm on April 8, with a guided tour through the hotel and Forty Five Ten.

HAVING AN (EYE) BALL
The perfect way to close off a week of revelry, the annual Eye Ball at The Joule is a thematic wonderland for the senses — sight, taste, touch, and sound. The theme of the soiree Saturday night is always the big surprise of the week, and this year’s ribbon-adorned Swoon-designed “Aye Eye Eye” invites have clued partygoers in they’re likely to travel South of the Border, at least for a few enchanted hours.

Says Justin Fields, The Joule’s general manager and newly appointed vice president of hospitality for Headington Companies, “(The theme) has become part of the folklore of the Eye Ball. It’ll be worth the suspense — every moment is a moment for design and surprise.“