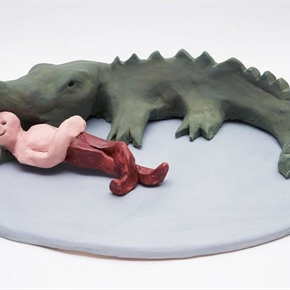 The ninth edition of the Texas-based art fair features new names and an exciting new programme.

Nestled in the midst of the revitalized downtown Arts District, Dallas Art Fair returns with a selection of international dealers and galleries presenting a range of artworks, from sculpture to video and installation. With over 30 new dealers exhibiting at the event from 6-9 April, the 90 galleries from 16 countries include big names such as additions Gagosian Gallery (New York/Los Angeles/San Francisco/London/Paris/Rome/Athens/Geneva/Hong Kong), Lehmann Maupin (New York/Hong Kong), Simon Lee Gallery (New York) and Shane Campbell Gallery (Chicago), alongside a 70 percent return rate from spaces such as David Kordansky Gallery (Los Angeles) and Carbon 12 (Dubai).

Dallas is positioning itself as an up-and-coming global art scene player with solid, albeit lesser known, artists, galleries and institutions. “The diversification and growth of our roster is a testament to the strength of the city’s burgeoning collector community,” said Dallas Art Fair co-founder John Sughrue in a statement, referencing the inclusion of galleries from art hubs such as Berlin, Brussels and Rome alongside locales further afield such as Hong Kong, Tokyo, Guadalajara and Bogota.

The well-rounded programme directed by Kelly Cornell is best discovered in-situ. Event highlights this year include: watching which works Gavin Delahunty, senior curator at Dallas Museum of Art, acquires for the institution’s permanent collection with this year’s doubled $100,000 funding grant from the Dallas Art Fair Foundation Acquisition Programme; the roundtable Absurdity in Art on 5 April at SITE131 featuring Cameron Schoepp and Jaime Tarazona discussing humour and art with local artists selected by Joan Davidow, founding director of Dallas Contemporary; a look into the renowned Karpidas Collection begun by Pauline Karpidas in the 1970s on 6 April; a discussion entitled Painting: Where has it been, where is it now, where is it going on 7 April at the Beck Imaginarium between curator and scholar Barbara Rose and artist Christopher Le Brun; and on 8 April, a collector-oriented panel from the Speaker Series entitled New Pitches: Reframing Artists for a Changing Market.