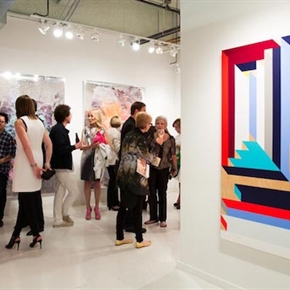 The ninth annual Dallas Art Fair takes place this April at its usual venue, the Fashion Industry Gallery (FIG) building downtown, and has announced a list of 2017 exhibitors. The fair has managed to lure a slew of first-time (and some big-name) international exhibitors this year, including Gagosian, Lehmann Maupin (New York/Hong Kong), and Simon Lee Gallery (New York).

At this point there are reportedly at least 90 galleries on board, with, as the DAF points out, a 70% return rate, galleries from 16 countries, and 30 new exhibitors this year.

Why all the newcomers? Maybe because 2017 will be the second year for the  Dallas Art Fair Foundation Acquisition Program, a collaboration with the Dallas Museum of Art “with funding doubling to $100,000. Hoffman Family Senior Curator of Contemporary Art Gavin Delahunty will select works directly from participating galleries to be purchased for the DMA’s permanent collection.”

The Fair takes place from April 6 through April 9.