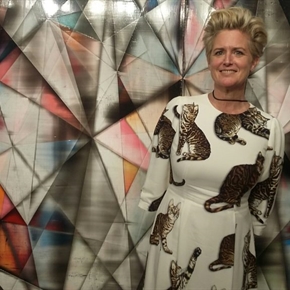 The Dallas Art Fair Preview Gala drew a record 2,000-plus collectors, patrons, curators, and VIPs to Fashion Industry Gallery for year nine of a convergence that has in less than a decade put Texas on the art fair map in a major way.

Serving as de facto ambassador for the Fair, co-founder John Sughrue graciously stationed himself in the FIG lobby, greeting the well-heeled, influential, and international crowd, hailing from Paris, Mexico City, London, Berlin, Dublin, Dubai, and all points of the United States.

“It’s been a slow burn,” Sughrue confided, discussing the path he and co-founder Chris Byrne have forged to bring the Fair to its current status — a respected player on the international circuit, and undoubtedly the best boutique fair in North America.

We also got a scoop from Sughrue, who revealed the group of collectors who support an acquisition fund made via the Fair for the Dallas Museum of Art, may grow to $250,000 in the next couple of years. It’s now already at a hefty $100,000.

Making a mad dash in from Houston and arriving at 8 pm Thursday night, there was a chance to look at about 20 percent of the Fair in some modicum of depth, so here follows booths that stood out from the first foray throughout the first floor. (We’ll report more in the coming days — come back to PaperCityMag.com for updates.)

Occupying a prime spot at the epicenter of the first floor, a conceptual takeover installation for Piero Golia — the must-stop booth of the Fair — drew every collector, and resulted in fervent interest in Golia’s “Mariachi Paintings,” work based upon the artist’s Chalet Dallas project for the Nasher Sculpture Center realized in 2015-2016.

Conduit Gallery: Nancy Whitenack and Danette Dufilho curated a gothic-feeling booth that resulted in sales to Texas collectors for Baroque-inspired ceramics by Tony Sonnenberg, and intense interest in an epic canvas of a bull by Annabel Daou.

Carrie Secrist Gallery: A monumental canvas by Shannon Finley, the artist’s largest painting ever to date, dominated. It stopped traffic, and evidenced a trend for geometric, prismatic paintings that permeated a number of booths at the Fair.

Erin Cluley Gallery: We can’t stop thinking about a new series of works, photographs by Chivas Clem, at Erin Cluley; the images melded the classicism of ancient Greece with eroticism, and a Versailles Hall of Mirrors effect. The series were photographed at the artist’s Paris, Texas, studio, once a 19th-century funeral parlor.

Cris Worley Fine Arts: With its underlying theme of nature and texture, Worley always is a strong player. One of its most exuberant offerings, a dramatic, dizzying 3D collage by Houston artist Patrick Turk is case in point. The work was based on the Garden of Eden, with a side of Cabinet of Curiosities.

Ro2 Art: Mother-and-son team Susan Roth Romans and Jordan Roth win our vote for the most democratic booth, with a dazzling array of paintings and sculpture hung salon style, and priced for all comers from $150 on. Best bets: Jeff Parrott’s hallucinogenic figuration, Bunim Kim’s fiber-based paintings (you can actually comb them), and carved paper canvases by Charles Clary.

Exhibitions and events in the Design District also added to the depth of the art gazing. Key stops were the Billy Childish exhibition breakfast at The Goss-Michael Foundation (reportedly the Childish canvas at the Fair entrance is about to be acquired) and a Heritage Auctions Morning After gathering hosted by Ed Beardsley and Frank Hettig — both great opps for art and collector sightings. Our Houston posse also branched out, again in the Design District, to Carneal Simmons Contemporary Art, Barry Whistler Gallery, and Galerie Frank Elbaz for respective showings Duayne Hatchett and Art Fairchild, John Pomaraand Darryl Lauster, and a group exhibition based upon the 1984 Wim Wendersfilm “Paris Texas” replete with Rauschenberg and Ruscha, alongside Julie Cook, Blair Thurman, Davide Balula, and Francis Alÿs. And while Larry Gagosian was nowhere to be seen, NASCAR royal Jimmie Johnson did go Fair shopping. (Johnson’s in Dallas for Sunday’s race at Texas Motor Speedway.) As did (perhaps no surprise) Cindy and Howard Rachofsky. PaperCity’s next art fair story will cover Dallas Contemporary’s winsome trio of exhibitions. Stay tuned.